Surfside Mayor Charles Burkett told USA TODAY the rescue efforts will continue “until we pull everybody we can out of that rubble.”

“We will not stop,” he said. “You can count on us to continue this search until we find every person who’s alive in that rubble.”

However, a fire burning beneath the rubble was hampering those efforts, officials said, as smoke spread laterally beneath the pile of debris.

Meanwhile, Levine Cava said she was directing the county’s Department of Economic and Regulatory Resources to immediately begin an audit of all buildings at the 40-year mark and beyond, to be completed within 30 days.

“We want to make sure every building has completed its certification process and move swiftly to remediate any issues that have been identified in that audit,” she said.

A wing of the residential building in Surfside, Florida, came down with a roar about 1:30 a.m. Thursday. Video footage captured from nearby showed the center of the building appearing to fall first, with a section nearest the ocean teetering and coming down seconds later as a huge dust cloud swallowed the neighborhood.

It remains unclear why the building collapsed. Researchers and engineers interviewed by USA TODAY pointed to a variety of possibilities, including sea-level rise, the corrosive effect of saltwater, the stability of the ground underneath or more mundane matters like shoddy construction or lax oversight.

Late Friday, the town of Surfside posted several documents to its website related to the collapsed building. None appeared to contain details that would explain the beachside building’s collapse but did reveal multiple, potentially serious issues.

By late Friday, candles, flowers and photos of the missing lined a fence as a burning electrical smell filled the air. Fire continued to burn beneath the rubble, officials said, despite efforts to put it out.

At Saturday morning’s press conference, Miami-Dade County Fire Chief Alan Cominsky said smoke was picking up as debris was removed, forcing firefighters to reevaluate and adjust their efforts. Air quality was becoming a concern, he said, with the possibility of using ventilators being weighed against the chance that employing them could intensify the ongoing smoldering.

Here’s what we know Saturday: 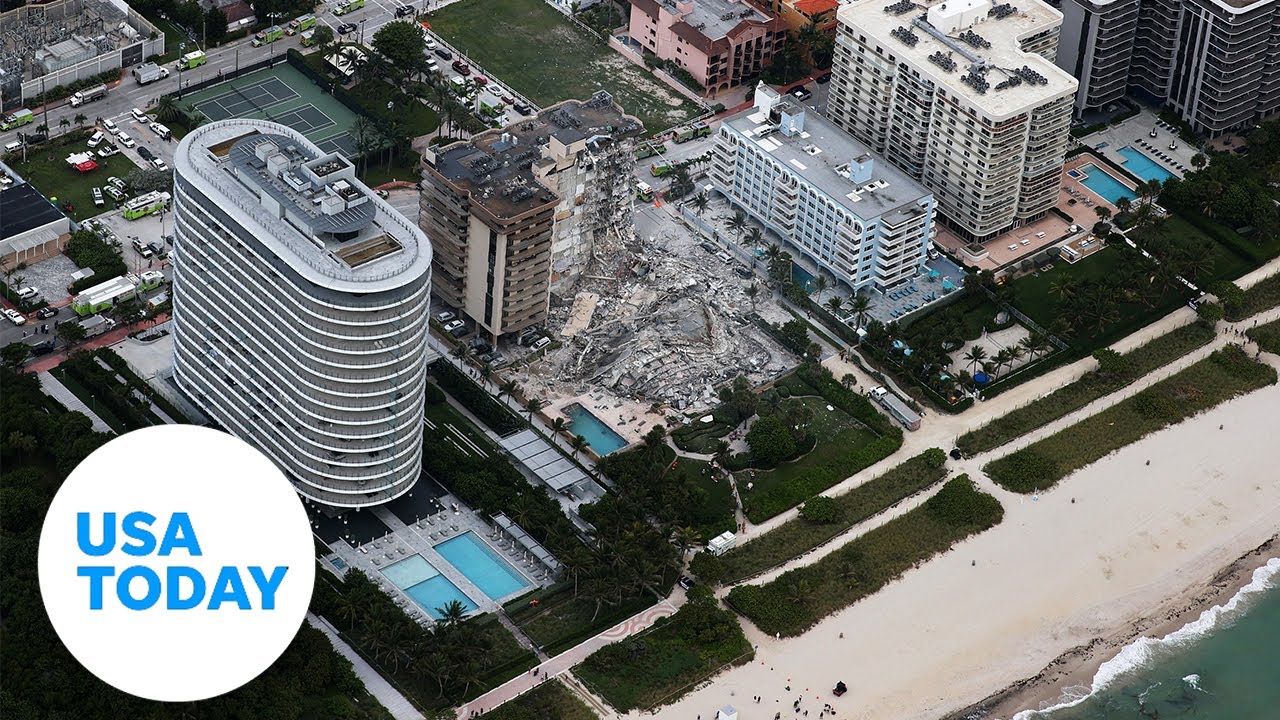 The death toll from the collapsed condominium building is at four as of Saturday morning. On Friday, relatives issued a statement identifying one of the deceased as Stacie Fang. Her son, Jonah Handler, was rescued from the rubble hours after the collapse.

The teen boy — who according to Miami’s WSVN is a sophomore, junior-varsity baseball player at a local high school — was rescued by Nicholas Balboa, who was walking his dog near the buildings around midnight when he heard the ground shake, followed by a loud crash. He approached the piles of concrete and metal and heard a scream.

Balboa said he spotted fingers popping out through the broken concrete and heard a boy’s voice say, “Can somebody see me?” Balboa said he climbed over rubble to reach the boy, later identified as Handler.

The reports, from a few pages to several hundred pages long, range from detailed plans to permits for concrete repair to a courtesy notice reminding residents to turn off exterior lights so baby turtles wouldn’t be confused when they hatched and not make it to the safety of the ocean.

An inspection report from Oct. 8, 2018, found “abundant” cracking and spalling of the columns, beams and walls in the garage under the tower that fell to the ground. Spalling refers to the deterioration of concrete, sometime causing flaking and the exposure of reinforcing steel bars known as rebar.

“Abundant cracking and spalling of varying degrees were observed in the concrete columns, beams and walls” of the ground floor parking garage, according to a structural field survey report by Maryland-based Morabito Consultants.

It appears plans to correct these problems were not solidified until April of this year, despite the original report having been issued in October 2018.

“Though some of this damage is minor, most of the concrete deterioration needs to be repaired in a timely fashion,” the report noted.

Gregg Schlesinger, a former construction project engineer who is now a lawyer handling construction defect cases, told the Associated Press that cracks reported in the tower’s stucco facade are another area of concern, possibly indicating structural problems inside the exterior that may have factored in the collapse.

“The building speaks to us,” Schlesinger said. “It is telling us we have a serious problem.”

“This is a wakeup call for folks on the beach,” he said. “Investigate and repair. This should be done every five years. The scary portion is the other buildings. You think this is unique? No.”

Researchers and engineers are trying to figure out what caused the building’s early morning collapse and what that might mean for other aging high-rises along the Florida coast and the rest of the country.

For now, there are no clear answers. USA TODAY spoke Friday with more than a dozen experts without finding a consensus. Some pointed to sea-level rise and the corrosive effect of saltwater brought with encroaching tides. Others wondered about the stability of the ground beneath or more mundane matters like shoddy construction or lax oversight.

On this point experts did all agree: It will take a long time to discern exactly how and why Champlain Tower South collapsed and that, once the answers are known, they’re likely to prompt changes to the building industry.

“The whole regulatory apparatus is behind the times, relative to current risks,” said Clinton Andrews, a professor of urban planning and director of the Center for Green Building at Rutgers University. “I think the case in Florida illustrates that problem.” Read more here.

Families wait for news of 159 people still unaccounted for

Officials said they still don’t know exactly how many residents or visitors were in the building when it fell, but they were trying to locate 159 people who were considered unaccounted for and who may or may not have been there.

Many of the missing have roots around the world, and among them are Orthodox Jews from Russia, Argentine Americans and the sister of Paraguay’s first lady.

About 20 Jewish people are among the missing, including some with Israeli citizenship, Maor Elbaz-Starinsky, Consul General of Israel in Miami, told USA TODAY.

Another 22 people were unaccounted for from Argentina, Venezuela, Uruguay and Paraguay, including relatives of Paraguayan first lady Silvana de Abdo Benítez. Read more about the missing, including a list of names, here.

Britney Spears To Speak In Court About Her Conservatorship

Don’t want to spend all day at the DMV? Now you can register your new vehicle online