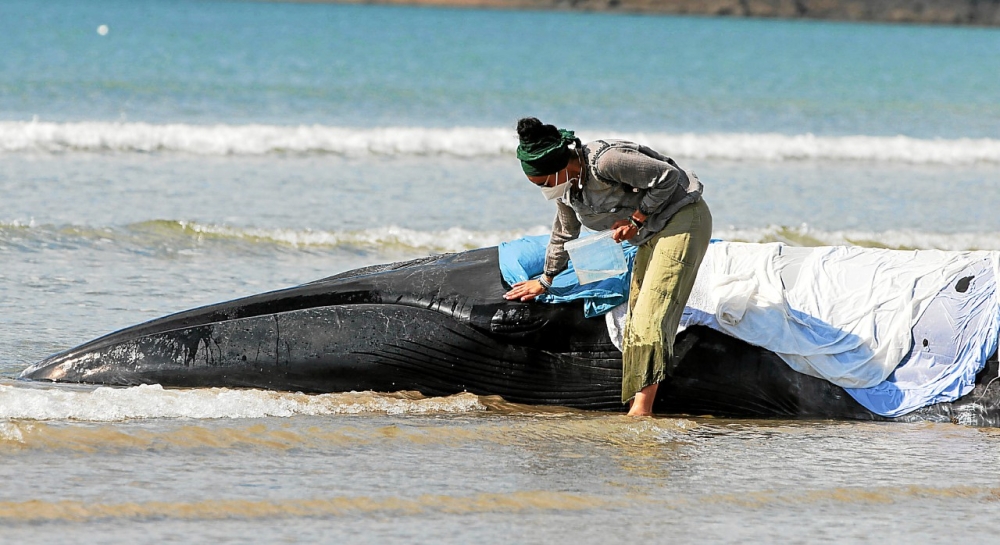 Sea Shepherd volunteers are not giving up: this Friday, they continued their surveillance operations with the whale in difficulty, released overnight from Monday to Tuesday after being stranded on the beach of Ty Anquer, in Ploéven, in the bay of Douarnenez. “For three days, it has been an animal that has been making circles in the water. We intervened twice to prevent it from running aground”, describes Lamya Essemlali, president of Sea Shepherd France.

“We must at all costs prevent it from failing again”

Helped until Thursday by the teams of the Iroise Marine Natural Park, the NGO now ensures alone the rounds around the whale, near the beach of Kervel (Plonévez-Porzay) this Friday. New volunteers will soon take over. “We follow it from dawn until dusk, on two semi-rigids that have been lent to us. We stopped following him at night since we were systematically losing him, ”continues Lamya Essemlali, determined to continue monitoring the cetacean, contrary to the remarks accusing the NGO of relentlessness. “It is not the dying animal that was described on Monday. As long as it is in the bay of Douarnenez, we will stay with it, we must at all costs prevent it from running aground again. Every minute spent out of the water is a suffering for a whale and if he must die, it is better that it is at sea”.

A rapprochement of the coasts “to watch”

A point of view shared by Olivier Adam, professor of bioacoustics specializing in cetaceans. “Humans are destroyers of the environment. It is our role to rescue any individual, including non-humans, from a catastrophic situation that could result from our actions,” says the scientist, without advancing on a possible disorientation caused by human activities, and on the reasons for the successive strandings in Cornwall.

At this stage, these do not constitute “an unusual mortality event”, considers the Pelagis observatory, based in La Rochelle. Pelagis recalls that in 2004, 2006, 2019 or 2020, around ten strandings per year were observed on the Atlantic and Channel coasts (including 40% in Brittany). “Nevertheless, cetaceans have been approaching the coast for three years. Is it due to a particular distribution of food, to climate change? Impossible to say for the moment, but it is a phenomenon to watch out for”, indicates Olivier Van Canneyt, research engineer at Pelagis, according to whom “it is a good thing that the whale is being monitored. We can only hope that it will go back to sea, but if it has to run aground again, we hope that it will be in an accessible area so that we can quickly take samples”.

Not all news on the site expresses the point of view of the site, but we transmit this news automatically and translate it through programmatic technology on the site and not from a human editor.
Patricia2 weeks ago
13 2 minutes read
Facebook Twitter LinkedIn Tumblr Pinterest Reddit VKontakte Share via Email Print

Five things to know about Renan Luce, at the heart of “A worried family”

She robbed her bank in Lebanon: “We have been shouting for three years, the power does not hear us”