The Highland Park gunman’s alleged uncle recalled how his nephew “wore women’s clothes at least once in the past” after cops said he fled the parade carnage wearing a wig.

Robert E. Crimo III is accused of firing 70 shots in a crowded parade and his uncle, Paul Crimo, told The Sun how he saw the 22-year-old dressed as a girl about a year ago and didn’t understand why.

“I’m shocked… This is too much to process,” Paul said from his car, following the death of a seventh person in the July 4 shooting.

“There were no warning signs. Nothing that I saw.”

Paul said he didn’t know why Robert was dressing as a woman and still didn’t understand why he would open fire on a crowd of innocent bystanders.

When asked if he had a message for anyone reading, he apologized to the families affected. 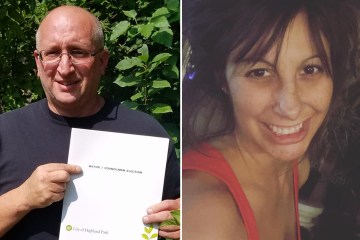 “I am heartbroken for each one of them. I will always be heartbroken.”

Paul added that he knew Robert had YouTube and social media accounts, but was unaware of the content of what was in them.

It was announced by Lake County State’s Attorney Eric Rinehart that Crimo, 22, is now charged with seven counts of first-degree murder and will face ‘dozens’ more. .

“These are just the first of many charges against Mr. Crimo,” Rinehart said Tuesday night.

Rinehart also said the seven counts of first-degree murder will carry a mandatory life sentence, if convicted, without the possibility of parole.

“We will seek the maximum sentence against this offender.”

On Wednesday, Rinehart will ask a judge to hold Crimo without bond.

“We must do everything we can to ensure that the horror that marked these streets does not happen again.”

Gunshots rang out just 10 minutes into a July 4 parade in Highland Park, Illinois, about 25 miles north of Chicago.

Highland Park Police believe the shooter climbed a ladder in an alley to access the roof of a business and then opened fire on parade-goers.

Authorities recovered a “high-powered rifle” believed to have been used in the mass shooting.

The suspect’s motive appeared to be random, investigators said before naming Crimo as the person of interest.

“Of course, at this point it seems to be completely random,” Covelli said.

The Lake County Coroner’s Office said five victims, all adults, were pronounced dead at the scene, while a sixth victim died at a local hospital.

On Tuesday afternoon, it was announced that a seventh person had died following the shooting.

Crimo was captured following an hours-long manhunt after he allegedly opened fire on parade goers on Monday.

He was arrested when cops tracked down the silver Honda Fit he was driving – hours after the deadly sniper attack at the parade.

Footage shared online shows the 22-year-old suspect being restrained and handcuffed by police just outside Chicago.

He was seen face down on the ground as cops rushed at him.

The capture comes after the suspected shooter was spotted around 6.30pm local time on Monday when officers tried to arrest him – but he fled, prompting a brief chase before coming to an end.

He was taken into custody “without incident” and charges are pending as police continue to investigate.

The FBI released a alert on Crimodetailing his appearance and tattoos as they inquired.

Crimo posted videos to a YouTube channel that has since been shut down due to violating community guidelines.

Several of these videos contained music created by him, as well as disturbing videos to accompany the tracks.

In 2019, the amateur rapper’s father, Bob Crimo, ran a mayoral campaign in the neighborhood with the slogan “One person for the people,” but he was unsuccessful, Fox News reported.