One year after the start of an unprecedented popular uprising, what is the situation in Lebanon? – RT in French 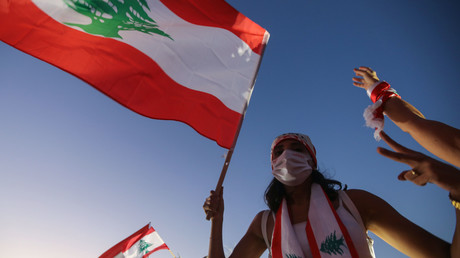 One year after the beginnings of an unprecedented popular uprising in Lebanon, hundreds of demonstrators gathered in Beirut on October 17, 2020. Have the economic and political situations really changed in the land of the Cedars?

Several hundred Lebanese beat the pavement on October 17, 2020 in Beirut as well as in Tripoli, a poor city in the north that has become a stronghold of protest. The opportunity to celebrate the first anniversary of an unprecedented popular uprising, unleashed on October 17, 2019 against a political elite accused of corruption, incompetence and deemed responsible for the economic and social slump that the country of the Cedar is going through.

If at its beginnings the protest sometimes mobilized hundreds of thousands of people, the gatherings were nevertheless reduced over the months, often violently repressed. On this anniversary date, a few hundred demonstrators rallied to the Place des Martyrs, an emblematic site of Beirut and a hotbed of protest, before marching through the capital. “October 17, 2020, the day the spark became a flame that will not go out. We will continue until the last breath […] we will continue the revolution, ”said Sami Saab, one of the organizers, quoted by AFP to the assembly.

Waving Lebanese flags and lighted torches, they converged in the evening towards the port to commemorate the August 4 explosion that left more than 200 dead, 6500 injured and 300,000 homeless. Gathered on a road overlooking the port, the protesters then observed a minute of silence.

In the evening, clashes broke out in the city center on the outskirts of Martyrs Square and Parliament, a handful of demonstrators throwing stones at the police who fired tear gas, according to a photographer from AFP.

At the origin of the unprecedented protest movement

Thousands of Lebanese took part in improvised rallies on October 17, 2019 in the streets of their capital as well as in other cities of the country, to protest against the government’s decision to tax instant messaging applications such as WhatsApp, Skype or Viber, despite already heavy telecommunications bills.

If the unpopular measure had been immediately canceled by the Minister of Telecoms, Mohammad Choucair, the Lebanese continued to flock the following days in the streets, drawing their motivation in particular in moments of unusual festivity in the middle of the demonstrations.

These reasons which set fire to the powder a year ago are still there not to say that they have been multiplied by three, by four, by five, by ten

Demonstrations whose slogans quickly took on a much larger dimension, the country facing the deterioration of its economy, in particular due to an unstable regional context marked by the Syrian conflict. For example, the public debt reached 86 billion dollars, or more than 150% of the GDP, in mid-October 2019. And the unemployment rate was around 40%.

“We must remember that the reasons that ignited the powder exactly one year ago are the economic and social crisis, the political crisis, the deterioration in living standards and the degradation of the Lebanese pound. These reasons which set fire to the powder a year ago are still there, not to say that they have been multiplied by three, by four, by five, by ten ”, thus confided on RT France the president of the Rassemblement Lebanese leaders and business leaders around the world, Fouad Zmokhol.

And to develop: “Today, the Lebanese pound has lost about 75% of its value. We are experiencing dramatic inflation with a three or five-fold increase in prices. So it’s impossible to survive today this truly atypical economic and social crisis. ”

“Ultimately, the exact reason for what caused this economic and social degradation in Lebanon is the people in power who are still there. They hang on and divide the pieces of the cake again. This cake which does not even exist any more, still estimated Fouad Zmokhol.

In the space of a year, this unprecedented popular uprising resulted in the resignation of three Prime Ministers: Saad Hariri, from October 29, 2019, on the 13th day of the protest movement; Hassan Diab, on August 10, following the explosion of August 4 in the port of Beirut, the responsibility of which is attributed by a large part of the public to the negligence of the leaders; and Mustapha Adib, on September 26, who had failed to form a new government.

Yet the political class is still there, absorbed in endless bargaining to form a government, and ignoring the calls of the international community for reform. Initially scheduled for October 22, parliamentary consultations to designate the future head of government were postponed for a week by President Michel Aoun. “My hand is always outstretched to work together and make the calls for reforms a reality,” the president reiterated on October 17 on Twitter, the protesters having often rejected his invitations.

As for Saad Hariri, a former prime minister who resigned in the fall of 2019 when the protests were in full swing, he now declares his willingness to head a new government.

Strength of the politico-community system

Several factors also explain why the revolution did not take the expected turn, first of all the solidity of the politico-community system. Besides the corruption of their ruling class and the lack of economic prospects, the Lebanese demonstrators were protesting against the religious quota system prevailing in the institutions, the army and the administration. Lebanon is indeed a multi-faith country (30% Shiites, 30% Sunnis and 30% Christians) with a fragile balance, as evidenced by the bloody civil war that devastated the country between 1975 and 1990.

Thus, the main political parties of the country are supported by a base of diehards. However, the absence of a leader capable of achieving unanimity is a determining factor: no popular figure has indeed been able to shake the current political leaders, which consolidates them in their influence.