SHE was once one of the most successful and glamorous female bodybuilders in the world before a tragic fall left her unrecognizable.

With her platinum blonde hair and rippling muscles, Denise Rutkowski was the poster child for the female bodybuilding community in the 1990s.

Denise earned the nickname “The Golden Panther” due to her striking hair and acrobatic dance routines.

The following year, she was hotly tipped to be crowned champion of the prestigious award when, without warning, she disappeared.

Much to the shock of her friends and fans, Denise announced her retirement from bodybuilding and declared that she was a born-again Christian. 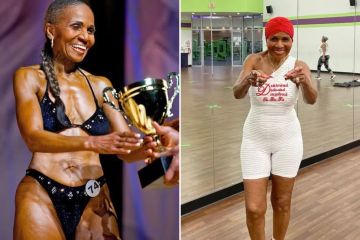 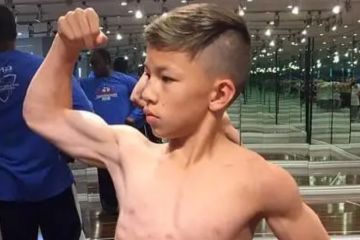 She enrolled in Bible college and essentially disappeared from public life for many years.

But in 2012, nearly two decades after reaching the height of her fame, a new photo of Denise revealed her devastating transformation.

That year, she was arrested and her mug shot revealed a starkly different appearance from her glamorous ’90s heyday.

Most shockingly, she had grown a wispy beard and matching mustache.

It was a tragic decline after such a promising start.

Born Denise Lynn Rutkowski in 1962, she spent her early years in Reading, Pennsylvania.

In a 1992 interview, she said she started gymnastics at age seven, followed by running and competing on her high school’s swim team and cheerleading team.

After teaching aerobics, she took up bodybuilding.

Not much else is known about her childhood, but at some point she moved to Texas before uprooting her life and moving to San Diego, California in 1989.

She lived in the city’s Mission Beach neighborhood while training at the legendary Gold’s Gym Pacific Beach.

In 1991, her career took off when she won both the Orange County Muscle Classic and the California State Championships.

She then moved to Venice, Los Angeles, training at Gold’s Gym in Venice Beach, dubbed the “Mecca of bodybuilding” and made famous by stars such as Arnold Schwarzenegger.

She still wants nothing to do with her bodybuilding past

In LA, Denise quickly became a superstar in the world of women’s bodybuilding.

With her beautiful movie star looks and remarkable physique, she quickly graced dozens of magazine covers and broadcasts.

She earned the nickname “The Golden Panther” due to the floor work she incorporated into her pageant performances, as well as the sparkling gold swimsuit she wore during her pageants.

Her most successful year was 1993 when she won first prize at the NPC USA Championships and the IFBB Jan Tana Classic.

She also finished second in the Ms. Olympia contest.

Besides being known for her looks and talent, Denise also had a heart of gold.

In 1993, she spent her free time taking underprivileged children from Venice on trips to WWF shows, Disneyland, and other sporting events.

Suddenly, at the height of her glory, Denise disappeared.

It turned out that she had made the decision to retire from bodybuilding and enroll at Calvary Cathedral International Bible College in Fort Worth, Texas.

After two years, it appeared that she was traveling across the country spreading the word of God at various religious events.

Other than a brief return to bodybuilding in 2001, Denise never spoke about her former life again.

Shortly after, it emerged that she was traveling across the country with her dog, living a semi-homeless existence, although whether or not that was by choice is unclear.

In 2019, an anonymous fan who runs Denise’s unofficial Facebook fan page said they had spoken to her family and she is now much better.

On November 30 of that year, they wrote, “Denise is now back in one of the ministries in Fort Worth.”

They added: “She still wants nothing to do with her bodybuilding past.”

Not all news on the site expresses the point of view of the site, but we transmit this news automatically and translate it through programmatic technology on the site and not from a human editor.
James2022-12-11
18 3 minutes read
Facebook Twitter LinkedIn Tumblr Pinterest Reddit VKontakte Share via Email Print