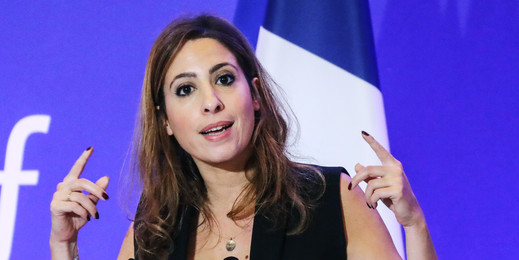 “What an era! “, the new appointment proposed on France 2 by Léa Salamé, settles in the place of” We are live “by Laurent Ruquier, every Saturday in the second part of the evening.

The mistress of ceremonies intends to place herself “in line with what this hut was”: a meeting place. “I grew up watching Ardisson”, at the helm of “Everyone talks about it” at the same time between 1998 and 2006, says Léa Salamé.

She designs her new show as “a mix of genres”, to capture the spirit of this “crazy, exciting, anxiety-provoking” era. For this, it will receive seven or eight outstanding personalities of cultural, political or media news.

Star of the morning of France Inter, Léa Salamé has made a specialty of political interviews. She also co-hosted the debate between the two rounds of the last presidential election. At 42, she says she “wants to get out of her comfort zone” with this new show.

At his side, a veteran of television: Christophe Dechavanne, 64 years old. “Christophe is neither a columnist nor a stooge. He is a permanent guest on the show, ”said Léa Salamé at Le Parisien.

“At almost 65, I’m starting a new adventure,” he enthuses. Before this “totally unexpected” proposal, I told myself that the case was a little folded” to return to television. The duo will actually be a trio since comedian Philippe Caverivière will also be on the bill.

Among the first guests, Jean-Luc Mélenchon will speak this Saturday evening as La France insoumise is shaken by the Quatennens affair. At the microphone of Philippe Vandel, on Europe 1, Léa Salamé explained that the invitation “had been launched well before all that, at the end of the summer”. Before adding: “Mélenchon likes to do the premieres, unlike others who are waiting to see if it’s good to come. He likes to take risks. »

Among the other guests, we find Laurence Ferrari, new political editor-in-chief of Paris Match (where some fear a takeover by the billionaire Vincent Bolloré), the actor-director Jean-Paul Rouve or the father Matthieu, young priest TikTok star.

Each week, at the end of the show, a “Sex Club” will open, during which a guest will come and talk about sexuality. “For the first, it is the influencer Camille Aumont Carnel who will take care of it. There will be pedagogy and bullshit, ”said Léa Salamé at Le Parisien.

The show will be recorded in public, usually on Fridays, but “we don’t refrain from being live on certain evenings” in the event of major news, explains Léa Salamé.

What about audience targets? “We have an audience clause” but “we will be given time to settle down”, according to the presenter who puts herself in a position of challenger, insofar as the box is no longer the first talk show from France for a long time.

Not all news on the site expresses the point of view of the site, but we transmit this news automatically and translate it through programmatic technology on the site and not from a human editor.
Patricia2022-09-24
31 2 minutes read
Facebook Twitter LinkedIn Tumblr Pinterest Reddit VKontakte Share via Email Print

Saturated emergencies: at the Rennes University Hospital, “it continues to get worse” – Rennes

Strike at Bibus in Brest: still no agreement between management and unions – Brest