JOSH JOHNSON returns to the San Francisco 49ers for a FOURTH stint with the franchise.

The 36-year-old former fifth-round pick is the most traveled NFL player of all time with fourteen different teams under his belt.

And that doesn’t even tell the whole story, with a host of XFL and UFL teams also taking up his services over the years.

Johnson was a star for San Diego in college, throwing for 113 touchdowns in three seasons as a starter.

After posting strong numbers in the NFL Combine, he headed into the 2008 draft with high expectations.

The Tampa Bay Buccaneers took a chance on the Oakland native, who at 6-foot-2 and 202 pounds was a threat in the air and on the ground. 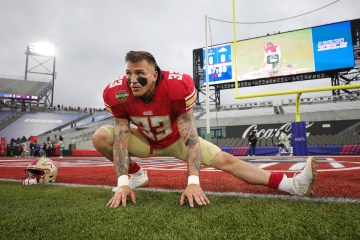 Johnson became the 160th overall pick and would have the most successful period of his NFL career with the Bucs.

He spent four seasons in Tampa, starting four games in his rookie campaign.

But after he left in 2012, his career took on a journeyman role.

Johnson’s team roster is longer than that of any other player in NFL history.

And for some of those teams — including the 49ers — he’s appeared on the roster more than once.

Along with the Niners and Bucs, Johnson has been on the roster for the Browns, Bengals, Jets, Colts, Bills, Ravens, Giants, Texans, Raiders, Commanders, Lions and Broncos.

In between his commitments to those teams, he also found time to play in the XFL and UFL for Sacramento Mountain Lions, San Diego Fleet, Los Angeles Wildcats.

Johnson is now in his FOURTH stint with the 49ers, but has yet to pitch in the NFL for the franchise.

He returns with Kyle Shanahan’s offense in jeopardy after losing Jimmy Garoppollo to a season-ending injury in Week 13.

Brock Purdy – Mr. Irrelevent of the 2022 Draft – will now be the starter as Johnson takes on backup duties.

Throughout this career, Johnson has earned solid money despite his lack of playing time.

His most lucrative year came in 2012, when he was with the Cleveland Browns.

That year, the play-caller appeared in a game for the Browns but didn’t play a single snap.

Throughout his time in the NFL for the past 14 years, Johnson has made 37 appearances.

During that span, he completed 58.1 percent of his passes for 2,270 yards and 13 touchdowns to 16 interceptions.

Nine of those games have been starters, with Johnson holding just one career win (1-8).

His last major league game was in 2021, when he started in place of an injured Lamar Jackson in Baltimore.

Johnson had a great performance, going 28 of 40 for 304 yards and two touchdowns and an interception.

But despite his best efforts, the Ravens lost the game 21-41 to the Cincinnati Bengals.

Not all news on the site expresses the point of view of the site, but we transmit this news automatically and translate it through programmatic technology on the site and not from a human editor.
James2022-12-05
12 2 minutes read
Facebook Twitter LinkedIn Tumblr Pinterest Reddit VKontakte Share via Email Print

Pope Francis, in Africa, urges end to cycle of violence in Congo

I’m a gym girl – people say my outfits are ‘too revealing’ but I don’t care, I feel confident in my clothes