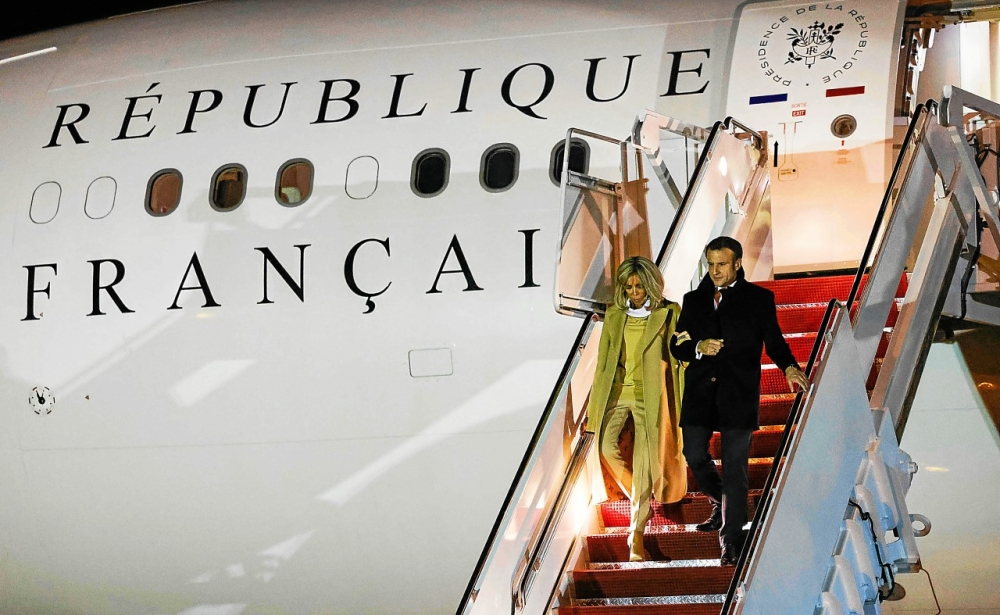 The French president and his wife, Brigitte Macron, who arrived in Washington on Tuesday evening, were invited this Wednesday evening by Joe and Jill Biden to a restaurant in the federal capital for a private dinner, a prelude to Thursday’s grand reception at the White House.

“US! A moment to celebrate the friendship between our two countries. A moment to progress together in a period of great challenges, ”Emmanuel Macron tweeted in English shortly after his arrival.

Like his Republican predecessor Donald Trump in 2018, the Democratic president chose his French counterpart for the first state visit of his term. “It’s about honoring our oldest ally,” spokesman for the American executive, John Kirby, told French journalists.

“France is literally one of the threads from which our nation is woven”, he added, multiplying the superlatives with regard to the “leadership”, “experience” and “wisdom” of ‘Emmanuel Macron who has, in the eyes of the American government, the advantage of “longevity” in his functions compared to a German Chancellor or a British Prime Minister who came to power more recently.

What a change of mood since this big anger in Paris, a little over a year ago! In September 2021, the United States announced a new alliance, AUKUS, with Australia and the United Kingdom, arousing the ire of France, which saw itself kept out of the American strategy for the key region Asia. -Pacific and lost, in passing, a mega-contract to sell submarines to Canberra.

Since then, Washington has taken many steps to appease its ally. “The level of cooperation, its depth, is quite remarkable when you think about the state of relations about a year ago,” said John Kirby. “Over the past year, France has been literally at the heart of every national security issue that matters to Americans and to our allies,” he insisted, referring to a partnership “resolutely focused on the future. “.

Wednesday is about themes for the future. Emmanuel Macron must follow the sequences on space cooperation, with Vice-President Kamala Harris and in the presence of French astronauts Thomas Pesquet and Sophie Adenot, on biodiversity and the climate with American parliamentarians, and on civil nuclear power with actors from the sector. The Head of State will also address the French community, after the traditional ceremony at Arlington National Cemetery.

The intimate dinner of the two presidential couples could make it possible to informally address the main topics on the menu for Thursday’s meeting in the Oval Office.

Before the visit, France tried to increase the pressure on the massive plan to support the energy transition wanted by Joe Biden, or Inflation Reduction Act (IRA), which grants generous subsidies to electric vehicles, batteries or renewable energies to provided they are “made in America”. Deeming this law “protectionist”, Paris said it hoped to obtain “exemptions” for certain European industries.

But the White House, very attached to this centerpiece of the Biden presidency’s record, has no immediate intention of announcing exemptions, and even less of unraveling its law – which it assures will benefit. , ultimately also to the European economy.

The Élysée is therefore placing greater emphasis on the other aspect of its parade against the IRA: the promotion, among other Europeans, of the adoption of a comparable commercial weapon, a “Buy European Act” which would give, also, priority to products made on the Old Continent.

The two leaders should also display a message of unity on Ukraine, promising to continue to support kyiv as much as necessary while explaining that negotiations with Moscow can only take place when Ukrainian President Volodymyr Zelensky deems it appropriate.

In the meantime, John Kirby gave a thumbs up to Emmanuel Macron’s sometimes controversial desire to maintain dialogue with his Russian counterpart Vladimir Putin.

Not all news on the site expresses the point of view of the site, but we transmit this news automatically and translate it through programmatic technology on the site and not from a human editor.
Patricia2022-11-30
20 3 minutes read
Facebook Twitter LinkedIn Tumblr Pinterest Reddit VKontakte Share via Email Print

Chalair prosecuted for complicity in concealed work, the trial adjourned to April 14 – Economy

Should hunting be restricted? The debate on the left

Rennais Stadium. Beat Lille to make the splits at the top of the standings – Stade Rennais