As the sun shines on Toronto’s Harbroufront, pedestrians enjoying a summer stroll are largely unaware of what lurks just by the water’s edge.

Ten marine trash cans were deployed by the self-proclaimed University of Toronto Trash Team. If you manage to find one of their baskets in the water, chances are it’s barely floating. This is because it is weighed down by the contents inside.

Ishani Sharma, an environmental science student at the University of Toronto (U of T), pulls out a syringe followed by an onslaught of plastic. From food wrappers and beverage containers to bottle caps and tumblers, each piece reveals the harsh reality: Lake Ontario is under siege.

Bigger tracks are easy to track and record. The shocking finding, according to the researchers, is the amount of microplastics in each bin. As she empties a bin onto a tarpaulin, Sharma estimates that it is only a quarter full.

This count is from a single bucket, after just 24 hours in the water. There are nine other baskets along Toronto’s inner harbour. That’s more than 10,000 pieces of microplastic extracted every day from just 10 bins, no bigger than a basketball net in diameter.

The program’s co-founder, Chelsea Rochman, is an associate professor of ecology and evolutionary biology at the University of Toronto. She says they took “game fish” from Lake Ontario. When they cut the fish, the growing ecological crisis is highlighted.

“We find hundreds of pieces of plastic in a fish’s gut and we also find pieces of microplastic in the fillet — the part you and I eat,” Rochman said. “So some people are eating microplastic.”

But it does not stop there. Rochman works with an engineering lab at U of T that tests local drinking water samples on planes.

Almost every piece of microplastic removed from Lake Ontario is tracked and recorded by the dozens of U of T students participating in the study.

From food packaging and water bottles to caps and tumblers, each piece reveals the harsh reality of plastic pollution.

After eliminating as many microplastic parts as possible, student Zoe Ungku Fa’iz details how she tackles this tedious job.

“We will sort all these tiny pieces and classify them into plastic pellets, foam pieces, fragments, or even sometimes we will still find large pieces of film (plastic),” she explained.

The so-called trash team has traced thousands of these pea-sized plastics to the sewers of factory floors, some of which are in remote towns.

Everything the team has taken out of the lake is shared with government officials, as the team pushes their evidence to make legislative changes.

The Canadian government banned the tiny beads found in soap products in 2018, though there is no federal regulation on microplastics or the industries that produce them, Environment Minister Steven Guilbeault admitted to CTV News that more needed to be done.

“There are things we need to do in collaboration with other levels of government,” Guilbeault said.

He added that “through the Canadian Council of Ministers of the Environment, we are working on a joint strategy to address plastic pollution, but I agree that microplastics are a problem and it is a problem. which we want to tackle”. 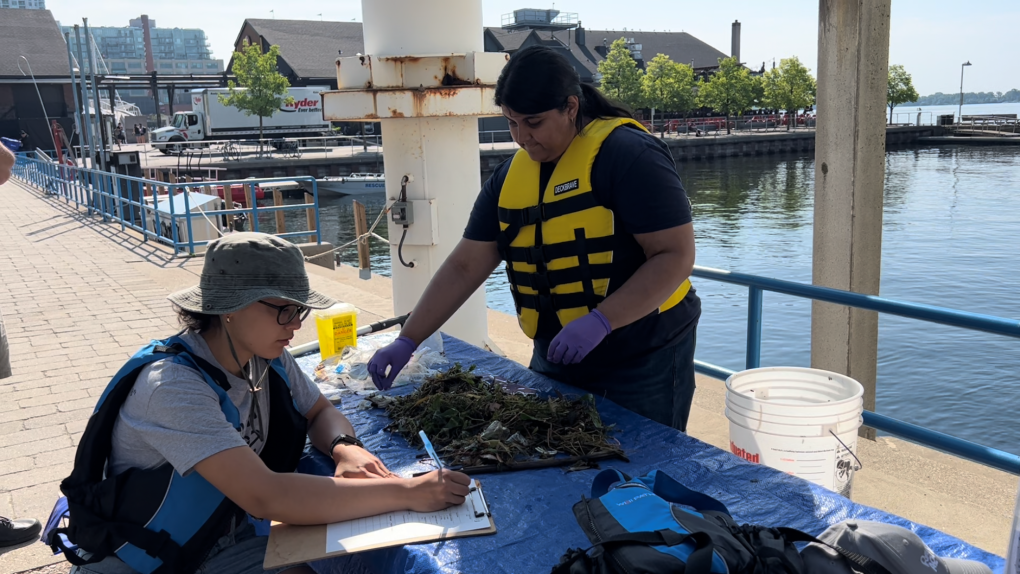 Almost every piece of microplastic removed from Lake Ontario is logged.

Speaking one-on-one with CTV News, Guilbeault also noted that the federal government’s upcoming ban on certain single-use plastics, while it may help, will not address the growing concern over microplastics.

The growing problem in the Great Lakes may be harder for the public in Toronto to ignore.

Emily Chudnovsky, a member of the Trash team and visual artist, collects the trash removed by the team every day. But instead of using the larger pieces, she will assemble the microplastics for a large sculpture that will float along the Harbourfront for all to see.

Chudnovsky hopes “this will make people think about the small as well as the big (plastics)”.

“Here at the Garbage Team, we’re taking a sample of a much bigger problem and collecting the data. I hope my sculpture will inspire people to stop, pause and take notice” , she said.