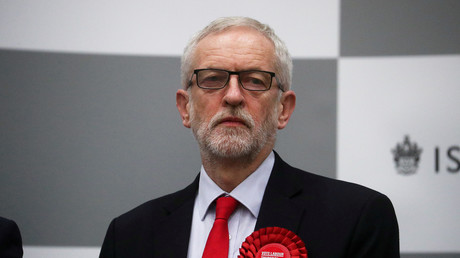 From the left line of the Labor party, Jeremy Corbyn was sanctioned following a report questioning his record in the fight against anti-Semitism within the party. It has been the subject of a campaign in this direction for months.

On October 29, the British Labor Party suspended the one who was its leader between 2015 and 2020, Jeremy Corbyn. The reason ? The challenge by the latter of the conclusions of a report on actions within the party at the time when he chaired it. In particular, the Labor MP, holding a left wing that does not earn him allies within his own party, was criticized for his “lack of will to tackle anti-Semitism” internally. An accusation from which he defends himself but which he has dragged on for many months.

For Corbyn, the problem has been “exaggerated”

After strongly denouncing anti-Semitism and underlining his determination to “eliminate all forms of racism”, Jeremy Corbyn reacted on October 29 on Facebook, to the publication of the report: “An anti-Semite is always one too many, but the scale of the problem [d’antisémitisme au sein du Labour] was also drastically exaggerated for political reasons by our opponents inside and outside the party, as well as by much of the media. ”

An analysis that hardly fits that of the current leader of the party, Keir Starmer, who had referred to a report “hard to read” and “a day of shame for the Labor Party”. “Labor will never let you down again, we will never again fail to tackle anti-Semitism and never again will we lose your trust,” the man who succeeded Jeremy Corbyn in April promised the Jewish community.

The sanction has therefore fallen. “In view of his comments today and their subsequent non-withdrawal, the Labor Party has suspended Jeremy Corbyn pending investigation,” the party said in a press release. Concretely, Jeremy Corbyn will no longer be able to take part in the votes of the lower house of the British Parliament as a Labor MP.

“I said very clearly that those who deny that there is a problem of anti-Semitism in the Labor Party are wrong”, he reacted on Twitter, strongly contesting “the political intervention” having led, according to him , upon suspension.

“Illicit acts” and lack of investigations, according to the report

In its 130-page text, the Committee for Equality and Human Rights (EHRC), a body mandated by parliament to fight discrimination, noted “unlawful acts” committed by Labor under Corbyn and required the party to an action plan to remedy the situation, under penalty of possible prosecution. In particular, the text noted a “significant number” of complaints for anti-Semitism, especially on social networks, which “had not been investigated at all”.

In a joint statement quoted by AFP, several Jewish organizations reported a “damning verdict on what Labor has done to the Jews under Jeremy Corbyn and his allies.”

More centrist and Europhile than his predecessor, Keir Starmer, who became head of the Labor Party 6 months ago, assured the Sky News channel that he did not want to “purge” the political formation of anybody.

“I don’t want a split in Labor. I presented myself at its head on the assumption that I was going to unite this party, but also to attack anti-Semitism, ”he stressed, specifying that he did not want a“ civil war ”within the labor training. As AFP points out, Keir Starmer nevertheless strives to “settle the legacy of Jeremy Corbyn”.

If the Labor Party has been investigated, it is because Jeremy Corbyn has been the subject of accusations of anti-Semitism for months, high-profile allegations across the Channel, which have sparked repeated incidents and resignations within the formation.

In March, in May and then in August 2018, Jeremy Corbyn had been implicated for anti-Semitism on several occasions, alternating between apologies and rebuffs. The leader of British Labor, for example, was criticized for his presence at a ceremony supposed to pay tribute to the Palestinian terrorist commando “Black September” in Tunis, in 2014.

Among the dozens of other accusations that overwhelm Jeremy Corbyn is that of his supposed “proximity” to the movements of Lebanese Hezbollah, the Egyptian Muslim Brotherhood and Palestinian Hamas, or the refusal by the Labor Party to adopt certain elements of the definition of anti-Semitism developed by the International Holocaust Remembrance Alliance (IHRA).

Jeremy Corbyn, however, has never shied away from the debate and has repeatedly tried to tackle the problem head on. On August 5, 2018, he published a video in which he explicitly rejected any anti-Semitism on his part or on the part of the Plowing, inviting the anti-Semites to quit his party because, according to him, they had no place there.

The party then separated from a hundred of its activists and even pushed out the former mayor of London, Ken Livingstone. Even the director Ken Loach, also under fire with accusations of anti-Semitism, had been excluded from the political party.