He recounted a sexual encounter which she wrote and read very dramatically while Kelly filmed it.

On Saturday, Kelly reposted a video and photos of people reading advanced copies of her upcoming memoir.

Albert Bianchini, a television producer, was the first video she shared.

Then actor and podcast host Bruce Bozzi posted photos of him reading the book and thanked Kelly for mentioning it.

The third person she posted was her husband, Mark, who seemed to have no problem reading an NSFW scene. 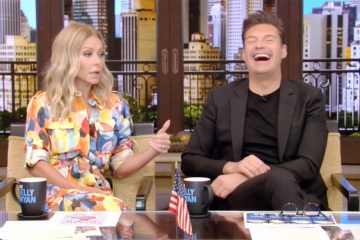 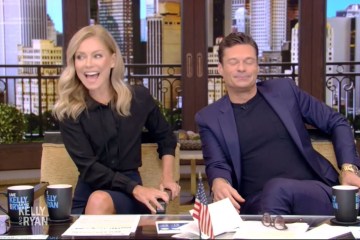 “Advanced praise for Live Wire courtesy of @instasuelos,” Kelly captioned the post, then linked the book.

“Are you nervous, baby?” he asked as he read Live Wire.

“He pulled me close to him and started kissing my neck and rubbing against me.”

Mark continued: ‘Now why can’t a woman get some level of comfort and support or a foot massage without it leading to sex?

“Apparently that’s exactly what he was going to do,” he read.

“It’s not that I was complaining because, let’s face it, I was wide awake anyway,” Mark turned the page.

“However, four and a half minutes later I was back to square one and he was sound asleep again.”

It’s unclear who she was talking about in the book, but fans will be able to find out when they pick up a copy, which comes out September 27.

Kelly recently promoted her book on Live With Kelly and Ryan and she shocked her co-host, Ryan Seacrest and their viewers with an NSFW answer to her question.

On the Sept. 20 episode, the mother-of-three kicked off a segment discussing her new book and tour.

“A week before the release of my first book, Live Wire: Long-Winded Short Stories,” she said with a smile.

“He hasn’t come out yet?” Ryan asked.

Kelly, 51, argued with him and said ‘no’ before telling him to ‘be careful’.

“Something, remember, I promised, I wouldn’t do? So I’m going on a book tour…” Kelly said with a serious expression.

After Kelly informed her audience that she would still be on the daytime talk show despite her show, the American Idol host popped her a question.

“Kelly, I’m just curious. What are your fans expecting on tour? What are they asking for? What do you think, like what are you preparing for?” He asked.

“Well, first of all… the nudity,” she joked.

“Is this a question and answer session? What’s the vibe?” Ryan asked, ignoring her answer.

Kelly explained that she was going to have a guest moderator and they would discuss the stories from the book.

Last month, Kelly opened up about her husband in an Instagram post after sharing a topless photo of him.

The 51-year-old ‘reminded’ viewers to watch her ABC game show Generation Gap with a catchy message.

She shared a photo of Mark, also 51, showing off his muscular physique in a thirst trap pose.

The actor, who met Kelly when they starred on All My Children together, wore nothing but a gold dog tag and matching sunglasses as he smiled for the camera.

In the caption, Kelly wrote, “A thirsty reminder to watch a brand new #GenerationGap tonight at 9/8c on ABC.”

“Items can be thirstier than they appear,” she added.

Real Housewives of Beverly Hills star Lisa Rinna even chimed in and said, “Thank you Kelly” and posted a fire emoji.

“Kelly Ripa you are one lucky woman,” one fan commented.

The couple have been married for nearly three decades, and this isn’t the first time Kelly has posted topless photos of her sexy hubby on social media.

Not all news on the site expresses the point of view of the site, but we transmit this news automatically and translate it through programmatic technology on the site and not from a human editor.
James2022-09-25
16 3 minutes read
Facebook Twitter LinkedIn Tumblr Pinterest Reddit VKontakte Share via Email Print

Opinion: The wand pulled off a diplomatic coup