KARDASHIAN fans have been shocked after a throwback clip resurfaced of Khloe sharing an intimate moment with Travis Barker.

The Hulu star could be seen playing a steamy game with the Blink 182 drummer, years before he started dating older sister Kourtney.

Khloe, 38, could be seen playing a hilarious game with Travis, 46, during an episode of Kocktails With Khloe in 2016.

The drummer and his now-sister-in-law could be seen getting closer in a sexually-charged game pass the orange – which sees players pass an orange around a circle using their bodies, not their hands.

Travis was seen trying to get Khloe the Orange under her chin, as she placed an arm around him to get closer in the throwback clip.

The Kardashians star rubbed her body against Travis in several failed attempts to pass the orange as onlookers laughed. 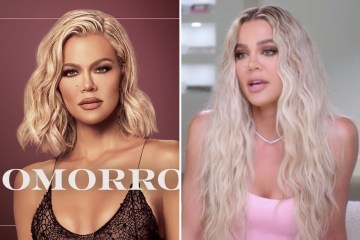 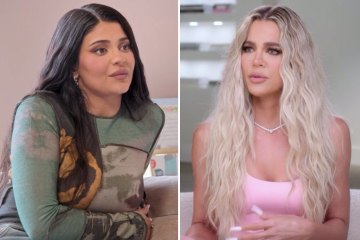 Remaining silent, Travis kept his hands away from Khloe’s body as the couple awkwardly rolled the orange between their two bodies.

Dressed in a skin-tight corset, which showed off her cleavage, a glamorous-looking Khloe chuckled as she moved closer to the drummer.

He could be seen looking very different with a neatly trimmed beard as he hid his embarrassed face behind a large hat during the game.

The clip came years before Kourtney, 43, started dating Travis in 2021 – with the couple getting married earlier this year in Italy.

Travis and Kourtney celebrated their third marriage in Portofino in May, after officially getting married in a courthouse ceremony in Santa Barbara, California.

The pair had been friends since meeting in 2006, with Travis first befriending Kourtney’s sister Kim, 41.

The couple got closer in 2017 when they became neighbors – and started having dinner together.

It comes after fans were shocked by flirty comments left by Kourtney’s ex-husband Scott Disick under a sexy photo of Khloe.

Khloe was seen showing off her curves in a skintight jumpsuit – as fans went wild in the comments section over her latest glam look.

Scott was among them, lending his support, writing, “Looking 2 fine”, alongside a fire emoji.

Fans slammed the baby daddy for getting into the mix, who shares three kids and an ongoing feud with Khloe’s sister Kourtney.

Earlier this year, Kourtney shaded Scott on her POOSH page.

The reality star shared a quote on her lifestyle and wellness account that read, “I have a wonderful life without you.”

As fans have hinted, Scott and his ex’s sister Khloe do indeed seem close.

“Khloe and Scott have a really good relationship,” a source told Us Weekly in December.

“He speaks well of her. They have a real connection. You can see when they’re together and it really shows.”

The insider added of the couple, who were spotted together, “No matter how uptight she is,” she “will always be there for him,” and Khloé thinks she “can reach out to Scott every times she needs someone to lean on”.

Not all news on the site expresses the point of view of the site, but we transmit this news automatically and translate it through programmatic technology on the site and not from a human editor.
James2 weeks ago
11 2 minutes read
Facebook Twitter LinkedIn Tumblr Pinterest Reddit VKontakte Share via Email Print