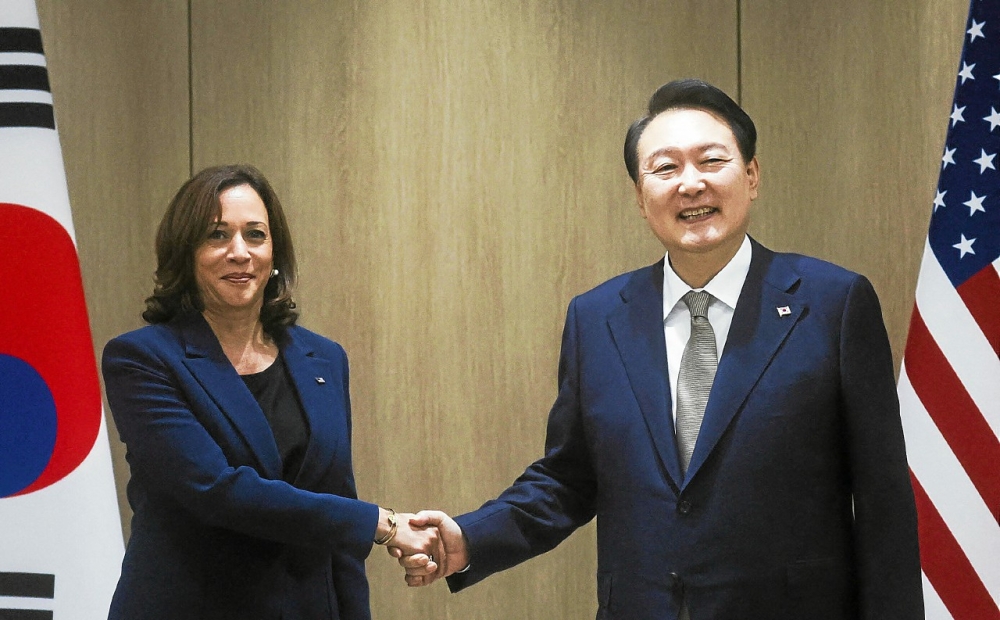 US Vice President Kamala Harris arrived in South Korea on Thursday to visit the heavily fortified border with the North, on a trip aimed at bolstering the security alliance with Seoul. North Korea fired two ballistic missiles in the days leading up to its visit, part of a record series of weapons tests since the start of the year.

His visit to the demilitarized zone (DMZ) separating the two Koreas could serve as a pretext for a new verbal escalation on the part of Pyongyang. The North called U.S. House of Representatives Speaker Nancy Pelosi “the worst destroyer of international peace” when she traveled to the border in August. Speaking aboard a US destroyer at a naval base before leaving Japan, the US Vice President accused Kim Jong-un’s regime of threatening regional stability with new missile launches, denouncing their ” illicit weapons”.

She had traveled to Japan to attend the state funeral of slain former prime minister Shinzo Abe. In Seoul, she met South Korean President Yoon Suk-yeol, who took office last May. They were to discuss the long-standing security alliance between the two allies, the strengthening of their economic and technological partnership as well as a range of other regional and global issues, his office said.

Seoul was also expected to raise concerns about a new law signed by US President Joe Biden that removes subsidies for electric cars built outside the United States, which would affect South Korean automakers like Hyundai and Kia.

Kamala Harris, the first female vice president of the United States, will also meet with what the White House has called “innovative women leaders” from South Korea to discuss issues related to gender equality. Yoon Suk-yeol, who has pledged to abolish the Ministry of Gender Equality, has been criticized in his country for the lack of women in his government.

Safety at the heart of travel

Security issues were expected to dominate Kamala Harris’ trip, with South Korean and US officials warning for months that Pyongyang is preparing to conduct another nuclear test. On Wednesday, the South Korean National Intelligence Service (NIS) estimated that this test could take place next month. According to the NIS, North Korean leader Kim Jong Un will likely choose the period between the next Chinese Communist Party congress on October 16 and the midterm elections in the United States on November 7.

North Korea, which is subject to multiple UN sanctions for its weapons programs, generally seeks to maximize the geopolitical impact of its tests by choosing the best moment. The communist country has tested nuclear weapons six times since 2006. Its last, most powerful test, carried out in 2017 – which Pyongyang said was a hydrogen bomb – had an estimated yield of 250 kilotons.

Under President Yoon, Seoul and Washington have intensified their joint military exercises, which they insist are purely defensive in nature. For its part, North Korea systematically denounces them as a repetition of an invasion. The allies are staging a large-scale joint naval exercise this week seen as a show of force in the face of growing provocations from the North.

Cheong Seong-chang, director of the center for North Korean studies at the Sejong Institute, told AFP he expected Yoon Suk-yeol and Kamala Harris to discuss the response plan for a new trial. Pyongyang nuclear. Kamala Harris’ trip represents “an opportunity to strengthen the high-level relations of cooperation and friendship between South Korea and the United States”, he noted. Seoul on Thursday announced trilateral anti-submarine drills with Tokyo and Washington, the first such drills since 2017, after officials said over the weekend they detected signs that Pyongyang might be planning a launch. ballistic missile test launched from a submarine (SLBM).

Not all news on the site expresses the point of view of the site, but we transmit this news automatically and translate it through programmatic technology on the site and not from a human editor.
Patricia2022-09-29
21 3 minutes read
Facebook Twitter LinkedIn Tumblr Pinterest Reddit VKontakte Share via Email Print

Saturated emergencies: at the Rennes University Hospital, “it continues to get worse” – Rennes

Strike at Bibus in Brest: still no agreement between management and unions – Brest