The former MTV star showered his son with a huge cake and an expensive dirt bike.

Jenelle, 30, shared an Instagram Reels video from the family party.

The video begins with Jenelle hugging her son in a selfie style smiling at the camera.

Her voiceover says she treated the teenager to lunch at Olive Garden, then picked up his huge cake. 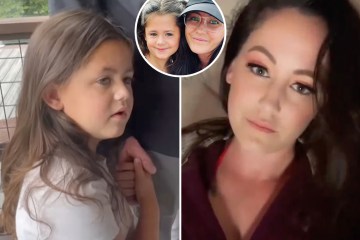 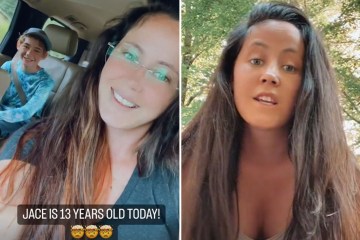 A close-up shows multiple layers of cake in the shape and design of motorcycle tires, with a dirt bike cake topper.

The writing on the cake in blue reads: “Happy 13th birthday Jace.”

Another shot of the video shows Jace wearing a dirt bike outfit putting on his gloves.

“Honestly, I didn’t need to have such a big cake,” Jenelle is heard saying in voiceover as she cuts through the multiple layers of vanilla.

Fans commented on the post wishing the teenager a happy birthday.

“They are growing up so fast. Handsome young man,” one fan wrote.

Another wrote, “Happy birthday. This cake looks so delicious.”

A third wrote: “Do I see a mustache starting? LOL Happy birthday.”

Before her birthday, Jenelle gave Jace her first birthday present.

The former reality TV star bought him an Apollo RFZ Z40 dirt bike, which is estimated to cost $2,000.

In the following story, the shirtless teenager wore his jeans and helmet as he hopped on his bike.

On a long stretch of deserted road, Jenelle filmed her son as Jace raced his bike.

She then snapped a photo of Jace as he posed with his stepsister Maryssa.

Jace flashed a smile through the helmet as he placed his hand on her waist.

Teen Mom fans weren’t thrilled that MTV Mom gave a “dangerous” and “cheap” gift to her son, who they deemed “too young.”

Another fan added, “She could have at least gotten him another one than that cheap shit.”

Taken from inside a car, the selfie shows the Teen Mom 2 alum positioned in the center of the frame while birthday boy Jace, 13, smiles from the backseat.

Fans on an online forum shared screenshots of the Boomerang video, captioned “JACE TURNS 13 TODAY!” where many felt that Jenelle was doing Jace’s birthday all around her.

One person commented: “It’s Jace’s birthday but he’s in the back seat all out of focus and she’s in the foreground covering 50% of the pic. Cool cool.”

Another fan wrote, “Oh of course HER birthday is her time to pretend she’s such a proud ‘mom’ and can’t believe he’s 13!”

The TV personality recently came under fire from fans for ignoring Ensley in a TikTok video.

Jenelle recently took to her TikTok profile to share a review of a local sandwich shop in Wilmington, North Carolina.

In the background, her followers could spot her daughter Ensley as she listened to her mother’s update.

She then opened the wrapper to reveal a large quartered sandwich, topped with a bag of Lay’s potato chips.

“I have a turkey club, look how delicious it looks, oh my god,” she said.

In the background, Ensley could be heard saying, “Mommy, mommy, mommy!” as Jenelle continued, “I’m so excited.”

“Mom, I want crisps too,” the little girl begged, looking over her mother’s shoulder.

“Okay, you can have some,” Jenelle replied.

But instead of feeding her daughter, Jenelle started eating on her own.

Jenelle then continued talking as her daughter pleaded for food in the background, saying, “Mom!”

The Teen Mom star shares Jace with his ex Andrew Lewis, although his mother Barbara has had custody of him since he was a baby.

Jenelle is also the mother of her eight-year-old son Kaiser with her baby daddy, Nathan Griffith, 34.

Woman in need of a kidney: a death row inmate could save my life | KTA