Pep Guardiola versus Jurgen Klopp. Manchester City versus Liverpool. Some have called it the best rivalry in English football history – and a new chapter will be written on Sunday.

The 2021/22 Premier League season is coming to an end with both footballing giants vying to win the league. Man City need a point to secure the title but, if they get it wrong, Liverpool know a win would take them the title.

The duo have dominated English football in recent years, changing the landscape of sport in this country, but how the hell did they do it?

Klopp was the first to arrive in the division in 2015.

The German had been out of work for just five months after leaving former club Borussia Dortmund, where, over a seven-year period, he won back-to-back Bundesliga titles, while guiding them to a Champions League final champions in 2013 – which they then lost to Bayern Munich at Wembley.

He was appointed by the Merseysiders in October after sacking Brendan Rodgers, where he announced at his first press conference that he was ‘The Normal One’, mocking when Jose Mourinho called himself ‘The Normal One’. Special One” upon his arrival at Chelsea.

Klopp’s first season in England ended with a European final – something that perhaps foreshadowed what was to become a common theme throughout his Liverpool career – with the Reds losing Europa League glory to Seville.

They finished eighth in the Premier League, while Man City finished four places ahead of them in fourth – which now seems absolutely unfathomable. But a disappointing league campaign spelled the death knell for Manuel Pellegrini at the Etihad Stadium.

Guardiola was appointed as City’s new manager ahead of the 2016/17 campaign, after rivals Manchester United tried to sign him in 2014 to no avail.

It would see Klopp and Guardiola return to the same division – they were no strangers to each other, remember, having fought for two years in the Bundesliga, which saw Pep win both titles in charge. Bayern Munich.

Guardiola recently spoke about trying to get the better of Klopp in Germany, saying: “The first time I played against his team I was new and it was ‘wow’, what a good lesson. We lost 4-2.

“After in the league, I learned a bit more about how to control these situations, but it was never easy.

“When Klopp talks about his football like heavy metal, I totally get it. It’s so aggressive. For the fans, it’s really good

“Our styles are not similar, but I really like the way they play, for the spectators, because in three or four seconds they attack.”

And maybe that’s what makes their rivalry so unique and exciting – their styles are so different, practically opposite.

Guardiola v Klopp in the Premier League so far 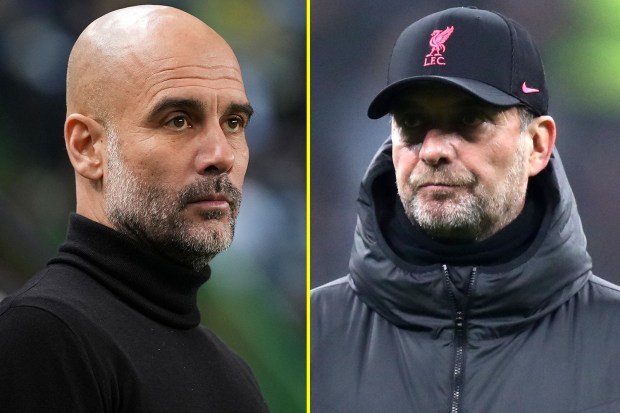 As we’ve seen from City over the past few years, their buildup is patient, their passing is exquisite and their football is virtually perfect – just as Guardiola’s Bayern and Barcelona sides were too.

Liverpool, on the other hand, like to get the ball and their players forward as fast as they can, pressing aggressively and throwing caution to the wind – ‘heavy metal football’, as Klopp, Guardiola and many others have called it. .

But both tactical setups have been equally successful for both and have led to complete dominance of English football in recent seasons.

It hasn’t always been rosy, Klopp’s early seasons against Guardiola were far less competitive than they are now.

The 2016/17 season ended with Liverpool fourth and City third, with both sides still getting used to the styles of football their respective managers were trying to implement.

The Citizens clearly got it before their Merseyside counterparts [it was either that or the £480million they spent]as they finished 25 points clear of them, having won the league on 100 points in the 2017/18 campaign.

But Liverpool’s signings of Alisson, Virgil van Dijk, Fabinho and Mohamed Salah – courtesy of Philippe Coutinho’s £142million transfer to Barcelona – appear crucial in what happened next.

Seven of the next eight Premier League first and second places have been taken by Liverpool and Man City [including this season]with the sole exception of last season when the Reds lost most of their centre-backs – including Van Dijk – to injury, and yet they still incredibly finished third.

Over the past four seasons, they have, between them, recorded the highest four points in Premier League history.

And on how the two teams are pushing each other, Klopp said: “I could say City are the toughest opponent I’ve ever had, but I mustn’t forget that I’ve faced them before at Bayern. , so I can’t say it was much easier. But I know what he means.

“We have pushed ourselves to insane levels over the past few years. Of course, we couldn’t cope with it last year for obvious reasons, but the other years we were really there.

And the duo don’t seem to be slowing down anytime soon.

We still don’t know who will be crowned champions of England for the 2021/22 season ahead of Sunday’s Premier League final.

But, when it comes to the title – as has been the case for the past few years and probably will be for the foreseeable future – the answer is, without a doubt, Manchester City or Liverpool.

bet of the weekend

The Foundry of Brittany taken over by a German company – Economy

New information on Trump’s state of mind on January 6

breaking news Our journey towards inclusion is far from over, says Zainab Patel of Pernod Ricard India