The reality star has posted a new video on Instagram showing off a makeover that fans say makes her unrecognizable.

Alana, 17, posted a video of herself sitting in a living room chair with the song Moment for Life by Niki Minaj.

The camera pans slightly around the reality TV star, who is donning a long platinum blonde wig.

Her hair is straight, with small baby hairs visible near her scalp.

She captioned the video, “Just wait for the pics,” before tagging her styling team. 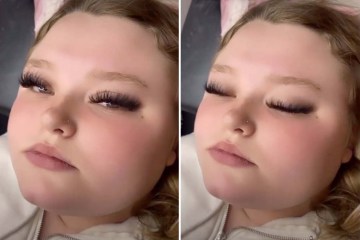 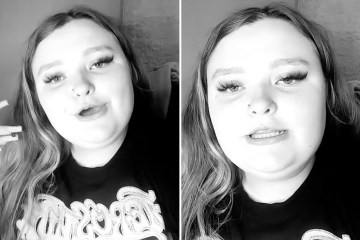 Fans were quick to comment on the new look.

“Girl!! You are growing up to be a beautiful young woman!” wrote a fan.

Another supportive fan wrote, “Wow she always looked beautiful but the older she gets the more her beauty side shines.”

Another wrote: “Becoming an independent young woman with so many talents, you look so beautiful!”

While most fans were all for it, other fans weren’t so in favor of her new look, which also included long false eyelashes.

“I love you, but it’s a weird mix of cultural differences in hair. Not for you, you’re a pretty girl, keep it real! JMO!” wrote one.

“Not the best pic! If it’s a wig, take a better one,” pinged another.

Another pleaded: “BE YOU! You don’t need false eyelashes, nails and that baby hair crapola!!”

The criticism comes after Alana showed off her eyelash extensions and makeup in another social media post.

The Lashed By Dannii entrepreneur posted a short clip of the Mama June: Road to Redemption star with her eyelash extensions.

The camera zoomed in on the former Toddlers & Tiaras star’s glamorous face.

Alana opened and closed her eyes to tease the “fluffy eyelashes.”

This isn’t the first time the TV star has shown off her dramatic lashes.

Alana blinked in the short clip and teased her new lashes.

She captioned the post, “This is so cute! I’m in love.”

Unfortunately, fans slammed the Dancing With The Stars: Juniors alum for trying to look older than she is.

Alana then cheered on her haters in a TikTok video.

The on-screen statement read, “Everyone: You really shouldn’t wear long eyelashes and fingernails! It’s really unprofessional for you.”

She mimicked the words, “Me: I literally told you to eat chitlin, girls who get it, get it. And girls who don’t, no.”

Alana celebrated her 17th birthday in August, while her mother, June Shannon, 42, was nowhere to be found.

Alana appeared to be having a good time, however, as she posed alongside her 21-year-old boyfriend, Dralin Carswell.

Pumpkin brought her husband, Josh Efird, and their children – including daughter Ella, four, and son Bentley, ten months – for the celebration.

June has a strained relationship with her four daughters and has been absent from the scene since her arrest in 2019.

Earlier this summer, The Sun US exclusively revealed that Pumpkin and Alana are in talks for their own show.

A source said: “They are in talks to have their own show, and they will meet in Los Angeles.”

In September, Th US Sun also revealed that the spin-off is currently in production.

Not all news on the site expresses the point of view of the site, but we transmit this news automatically and translate it through programmatic technology on the site and not from a human editor.
JamesOctober 7, 2022
3 3 minutes read
Facebook Twitter LinkedIn Tumblr Pinterest Reddit VKontakte Share via Email Print

Why the astrophysicist has ‘very high expectations’ for life beyond Earth