ABC News’ chief meteorologist took to Instagram this week to share shocking footage of sharks swimming off the coast of Chatham, Massachusetts.

Ginger captioned one of her posts: “White sharks! We saw at least 9 individuals in just two hours on the water.”

In one of the video clips, shared on Wednesday afternoon, Ginger explains, “There’s an airplane above our heads spotting sharks for us.

“He tells us where to go and so far we’ve had more than half a dozen that we’ve spotted. Nothing has been marked yet. 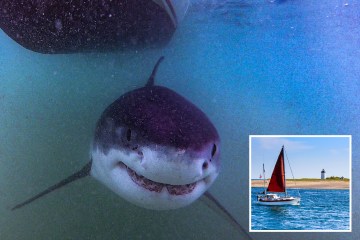 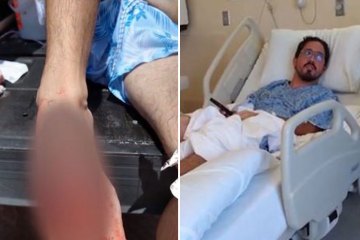 In a follow-up clip, captioned “Tagging great white sharks! We saw 10 in 4 hours. Studying amazing,” someone says, “Look at the size of that sucker!”

A shark is then seen swimming alongside the boat before one of the searchers manages to place a satellite tracking beacon on it.

Concerned fans immediately took to the comments section to urge Ginger to be safe.

“Just watch your arms! Not the same as feeding the tarpon when you were here,” one person wrote.

“The land is trying to tell humans to stay out of the water,” a second commented.

Others, however, were thrilled to see the footage, with one Instagram user writing: “Tall white juveniles? So happy to see the ecosystem bouncing back up there.

“The seals are here The sharks and orcas are coming back It’s beautiful.”

“And you know there are way more than tagged! Thank you Ginger!!!”

“Take me with you! Watch Shark Week on Discovery this week…so cool you can see great whites in person!” said a third.

Meanwhile, GMA fans feared for Ginger’s safety after reporting the California wildfires on the front lines.

Ginger shared a video of herself in a fire suit walking through smoky areas in the middle of the night and an out of control fire that appeared nearby.