A Florida man has been charged with human trafficking after the bodies of four people, including a baby, were found in Manitoba near the Canada-US border.

Steve Shand, 47, was arrested by the US Border Patrol on Wednesday for trafficking undocumented foreign nationals, according to the United States Attorney’s Office for the District of Minnesota.

The charges against him have not been proven in court.

The U.S. Attorney’s Office said Wednesday that U.S. Border Patrol arrested Shand, who was driving a 15-passenger white van in a rural area less than a mile south of the border. The statement alleges that there were two undocumented people in the van.

According to a statement from the United States Attorney’s Office, as Shand and the two passengers were taken to the Pembina Border Patrol Station in North Dakota, five other people were found just south of the border walking towards where Shand had been arrested. .

The statement said the five people told officers they had crossed the border expecting to be picked up by someone.

Manitoba RCMP Assistant Commissioner Jane MacLatchy said around 1:30 p.m. officers found the bodies of three people on the Canadian side of the border, about 10 kilometers east of Emerson.

She said the bodies included an adult man and woman and a baby. A fourth body, a boy thought to be in his mid-teens, was found shortly afterwards, she said.

“The corpses have been tentatively identified as the separated family of four,” the statement from the U.S. Attorney’s Office said.

RCMP said the four bodies were found about 40 feet from the border.

A map provided by Manitoba RCMP shows the approximate area (circled in red) where the bodies of four people were found on January 19, 2022. (Source: Manitoba RCMP)

“At this very early stage of the investigation, it appears they all died due to exposure to cold weather,” MacLatchy said, adding that RCMP believe the four people are related to the group that was apprehended. on the American side of the border.

MacLatchy said RCMP investigators are working closely with US Customs and Border Protection and the US Department of Homeland Security.

She said it would take time to identify the names, ages and nationalities of the four people, adding that an autopsy was planned to confirm the cause of death. At this point, MacLatchy said investigators don’t know how these four people got to Emerson.

“We are very concerned that this attempted crossing may have been somehow facilitated and that these people, including a baby, were left to fend for themselves in the midst of a blizzard so that the weather was hovering around -35°C taking into account the wind,” she said. .

“These victims had to deal not only with the cold, but also with endless fields, large snowdrifts and total darkness.”

MacLatchy said that in past attempts to cross the border, the RCMP have seen organized groups involved.

RCMP said officers continued to search the area Thursday for other potential victims, but none were found.
MacLatchy said due to the very difficult terrain and deep snowdrifts, the RCMP needed all-terrain vehicles for the search. 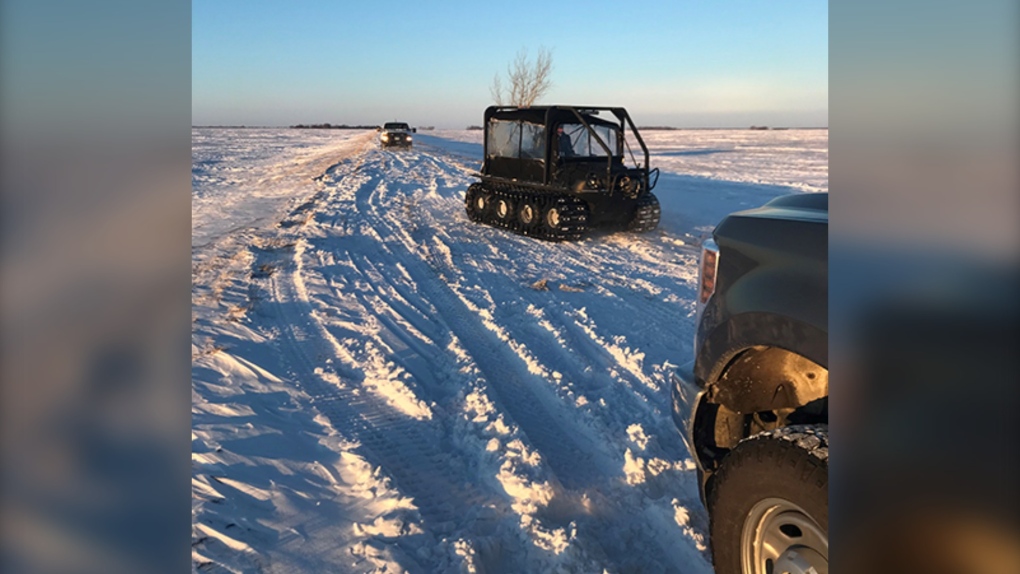 Manitoba RCMP use all-terrain vehicles (pictured) during a search near the Canada-US border on January 19, 2022, where the bodies of four people, including a baby, were found. (Source: Manitoba RCMP)

“I also have a message for anyone considering crossing the border into Manitoba, whether it’s south or north – don’t do it,” MacLatchy said. “Don’t listen to anyone who tells you they can get you there safely. They can’t.”

MacLatchy said she understands some might have a great need to travel to another country, but said that’s not the way to do it.

“You risk your life and the lives of the people you care about if you try it,” she said. “We simply cannot have another tragedy of this magnitude in Manitoba or in Canada.”

“Shand is charged with one count of knowing or recklessly ignoring that an alien came, entered, or remained in the United States contrary to law, transported, moved, or attempted to transport and move such aliens,” the United States Attorney’s Office said in a press release.

He added that Shand is presumed innocent until proven guilty beyond a reasonable doubt in court.

He remains in custody.