HORRIFYING footage has revealed a nearly 18ft python lying on a US road after being captured by three amateur hunters.

Jake Waleri, Joshua Laquis and Stephen Gauta were driving through the preserve looking for pythons when they came to the long reptile on US-41.

Speaking to Fox affiliate WFTX-TV, Stephen Gauta – one of the hunters who captured the snake – recounted the fight with the python which lasted over five minutes.

Gauta explained: “You know, when you grab their head, they try to pull you in the middle of their body so they can wrap you around.

“I had to fight that pull towards the middle of his body while Jake controlled the rest of his body to keep him from coiling up.” 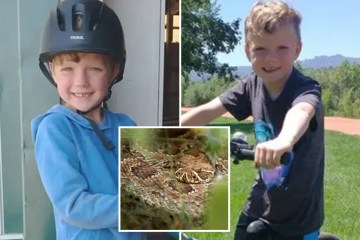 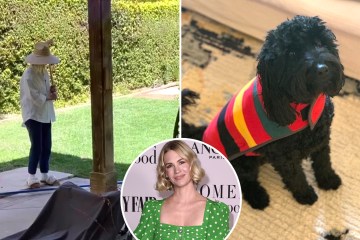 Joshua Laquis, who saw the other two hunters fight with the snake, said he felt “pure adrenaline” when they spotted the snake.

“I don’t even remember the first 10 seconds. We all jumped out of the car screaming,” Laquis said.

The group caught the Burmese python – which is considered an invasive species in the state – after noticing it lying on the road they were driving on.

Jake Waleri, who was driving the vehicle, told the outlet, “These big snakes are called ‘south Florida speed bumps’ for a reason and I know why now.”

Waleri estimated the snake – which was captured by him and his cousin Gauta – to be between 15 and 20 years old.

The python marked the 31st snake captured by Waleri and Gauta.

Waleri said he heard of a hunter who saw a “monster snake” crossing the road in the same area just days before he caught it.

“We caught him in the exact same area he signaled,” he added. “We’ve been thinking about this snake for the past few days and we may have come across it last night. It was just a crazy experience.”

They caught the snake just days before the 2022 Florida Python Challenge.

Waleri joked that his hunting group was “getting closer to the big leagues, adding, ‘We’re happy…as amateurs, catching that snake is just insane. It would have been great if we had caught it in two days while hunting, but there are other big ones in the clearings.

According to the US Geological Survey: “Non-native Burmese pythons have established a breeding population in southern Florida and are one of the most worrisome invasive species in Everglades National Park.

“Pythons compete with native wildlife for food, which includes mammals, birds and other reptiles.

“Severe mammal declines in Everglades National Park have been linked to Burmese pythons.”

Meanwhile, a young boy has tragically died days after being bitten by a rattlesnake in Colorado.

Six-year-old Simon Currat was attacked on July 5 and fell into a coma before dying five days later.

Twins give up five-run lead, then slip past Toronto 6-5 in 10 innings