A year has passed since news broke of the detection of unmarked graves at the site of what was once Canada’s largest residential school – an announcement that for many Indigenous survivors confirmed what they already knew.

A day-long memorial brought dozens of people to Kamloops, British Columbia, on Monday to mark the anniversary as work continues at the site and to honor the children who never returned home.

A sunrise ceremony was held on the grounds of the Tk’emlúps te Secwépemc powwow, not far from the former Kamloops Indian Residential School.

It began with an opening prayer and included a moving speech by Kukpi7 (Chef) Rosanne Casimir.

“What scientific inquiry has confirmed are the truths about our survivors and what they always knew,” she said.

“Too many children haven’t come home.”

Day to honor children who were taken from their homes and never returned includes cultural performances, dances, drumming and speeches, and will end with an evening prayer, which will be attended by the Prime Minister Justin Trudeau.

Trudeau will meet with the community and participate in a closed meeting with Casimir and members of his council, before taking part in the closing ceremonies which are scheduled to begin around 7 p.m.

It has been a year since members of the Tk’emlúps te Secwépemc First Nation announced the discovery of what they believe to be the remains of up to 215 people buried in an unidentified area on school grounds.

A file was opened by the Tk’emlúps Rural RCMP last spring and the matter is still under investigation.

Casimir said it had been a painful year for some, describing the announcement a year ago as “like a wound reopening”, but also an opportunity for healing.

She said science would support next steps, but Tk’emlúps te Secwépemc First Nation is taking time, knowing the impact of the survey on the community.

Casimir also noted the impact of the discovery on people outside the community, encouraging non-Indigenous people to want to know more about Canada’s hidden history.

“Unmarked Graves brought truth to the world, and the world stood with us in solidarity and unity,” she said.

Governor-gen. Mary Simon was at the sunrise ceremony and simply said, “You knew. You have known for so long.

Speaking to survivors and their loved ones, she said the investigation has been called a discovery, but it is confirmation.

“You knew what happened here, the atrocities, the deaths, the losses. And the silence… And now everyone knows it. It shouldn’t have taken this long, but eventually people know. “

Drummers play and sing during a ceremony marking the one-year anniversary of the announcement of the discovery of children’s remains at an unidentified burial site at the former Kamloops Indian Residential School in Kamloops, British Columbia, Monday, May 23, 2022 THE CANADIAN PRESS/Darryl Dyck 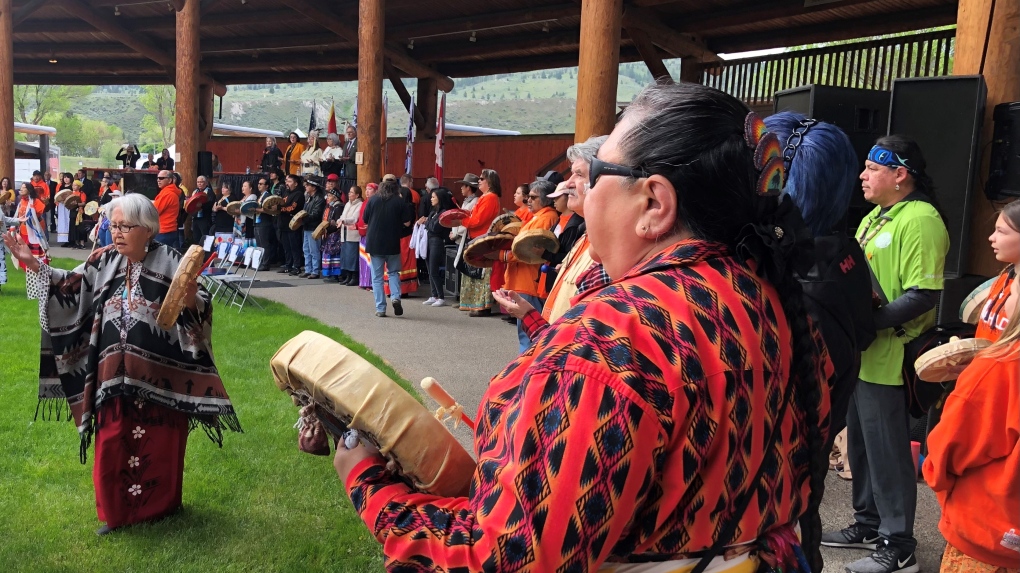 The search area was determined in part by the discovery of a child’s rib and a teenage tooth, and is the site of what was once an apple orchard, when the school was in operation.

Sarah Beaulieu, a professor at the University of the Fraser Valley and a member of the research team, called what she found “targets of interest” when she described the technical side of the investigation in last July.

While the only way to confirm what’s in the graves is by exhumation, according to the experts behind the detection, the find matches stories from survivors of the school, some of whom described having been woken up in the middle of the night to dig graves in the orchard. .

Some of these children were only six years old.

Currently, the ongoing investigation in the Kamloops area is not focused on excavation and forensic analysis, but on ground penetrating radar search of the rest of the site, as only a small portion of the ground has been examined in the original study. 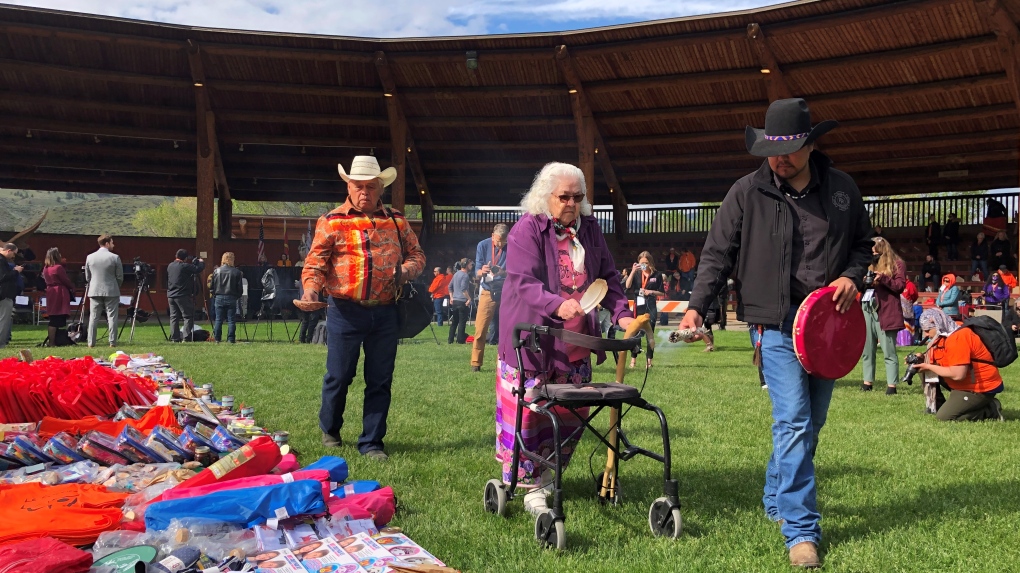 One of the people who went to school as a child was Clayton Peters, who told The Canadian Press that it was “the most horrible pain in the world to be a native, to be an Indian at the ‘era”.

He and his brothers attended school in Kamloops in the late 1960s, well into the 1970s, and said he remembered thinking that children who suddenly disappeared were the lucky ones.

“I always thought that they had run away like me, that they had succeeded, that they were free,” he said, crying. Now he thinks some of those children’s remains might be among those hidden under the orchard.

Before he was deported at the age of 17, Peters said, he was regularly beaten and assaulted. Children who spoke their own language were made to eat soap, he said, and they were also made to scrub their bodies with lye to “take them off the brown.”

When children fell ill, he said, they were placed in a dark room rather than cared for. The coin also served as a punishment.

“I’ve been sad all my life. When I left that school, I fought everybody. I fought every white man that ever came across to me. I was so mad,” a- he declared.

Another survivor is Ron Ignace, who told CTV News last year that he was beaten for speaking his native language, but refused to give up the Secwepemctsin language altogether.

“I thought in secwepemctsin and I spoke in English, knowing full well that they couldn’t beat me for what I thought,” he said in an interview on the first National Day for Truth and the reconciliation.

He ran away while on furlough on his 16th birthday and said he was living proof that the school system had failed in its purpose, described by the Truth and Reconciliation Commission as a campaign of cultural genocide.

And what happened back then had a lasting impact.

“It’s a heavy truth. It’s been called a dark chapter in history, but indigenous peoples are very much alive with the repercussions they are experiencing today,” Kukpi7 Casimir said in July.

It is important to remember that the Kamloops school is only one of 139 schools in the system. 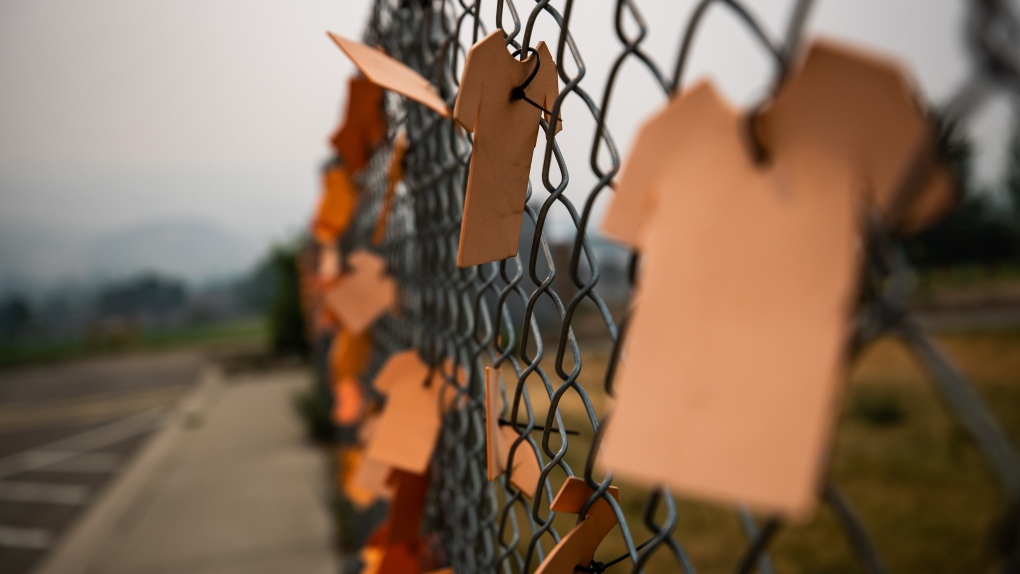 Many spoke of the deaths and disappearances of children who attended school and other residential schools in Canada.

The Kamloops discovery marked a year of additional investigations in schoolyards across the country and calls for truth, acknowledgment and apology from the Canadian government and the Catholic Church, which operated many institutions in the residential school system.

The pope issued an apology earlier this year and is planning a trip to Canada this summer that will include visits to First Nations communities, but none to British Columbia.

Casimir included in his opening remarks a thank you to church members, including a local bishop who is committed to working with indigenous peoples toward reconciliation.

“We know that many of our fellow citizens still practice Catholicism. We all need to have faith, we all need to hope, we all pray to the one creator, the one god.”

With files from Ben Miljure of CTV News Vancouver in Kamloops, BC, and The Canadian Press 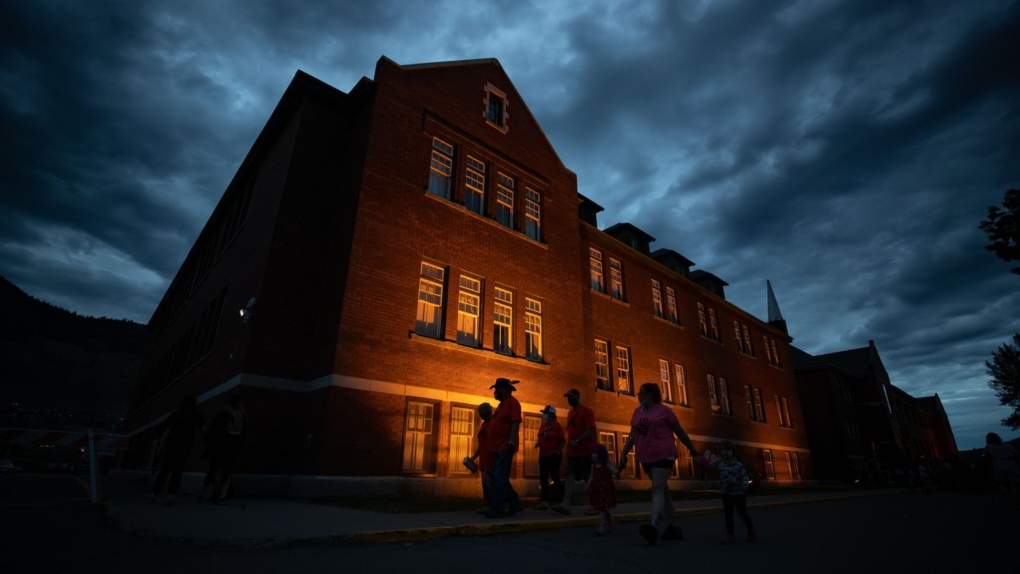 People are silhouetted as they walk past the former Kamloops Indian Residential School after gathering to honor the 215 children whose remains are believed to be buried near the facility, in Kamloops, British Columbia, on Monday, May 31 2021. The year since the Tk ’emlups te Secwepemc First Nation announced that ground penetrating radar had located the alleged burial sites in a former apple orchard was one of the national reckonings on residential schools in Canada . THE CANADIAN PRESS/Darryl Dyck

A woman killed and her companion seriously injured near Toulouse: the alleged attacker arrested

Democratic Rep. Judy Chu arrested during protest against abortion rights outside US Capitol