An overview of JLR’s performance in the June quarter:

JLR’s revenue was impacted by supply changes, including semiconductor shortages, the slower-than-expected ramp-up of production of the new Range Rover and new Range Rover Sport, and lockdowns in China.

JLR’s loss mainly reflects lower wholesale volumes with a weaker mix, as well as unfavorable inflation and currency and commodity revaluation. Additionally, Tata Motors said in an earnings press release that the operating margin was due to lower volumes and an unfavorable mix.

Here’s what the brokerage firms are saying:

Jefferies said weak earnings at JLR led to lower EBITDA, but the company expects a significant improvement in performance starting next quarter. However, the foreign brokerage firm cut its earnings per share estimate for FY23 by 24%.

Nomura noted the loss of earnings in the first quarter of FY23 and added that debt reduction was a key driver of the stock’s performance going forward. The brokerage firm also said improved chip supply would help JLR.

Meanwhile, CLSA said: “We are reassured by JLR’s growing backlog and the strength of the domestic business.”

The recovery in the medium and heavy commercial vehicle segment is well underway, and the automaker is expected to further accelerate the passenger vehicle segment.

Here is Tata Motors market share in the CV, PV and EV space: 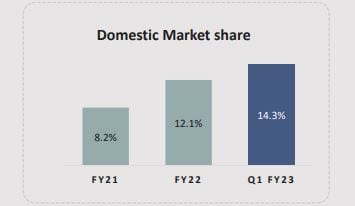 “We expect demand to remain strong despite concerns over inflation and geopolitical risks, while the supply situation should improve,” Tata Motors said. The company added that lower commodity prices should help improve underlying margins.

Tata Motors aims to deliver strong improvements in EBIT and free cash flow from the second quarter to achieve near net auto debt by FY24.

For JLR, the automaker expects the chip offering to gradually improve. It continues to expect significant improvement in volumes and profitability over the remainder of the fiscal year ending March 31, 2023.