Parts of Delhi-NCR (National Capital Region), which have been rocked by intense heat waves, experienced a major respite from the scorching heat early on Monday. As Delhi experienced heavy rain on Monday, a SkyMet weather official said the city recorded a low temperature of 17.2 degrees today, the lowest in May in 40 years.

#Delhi recorded a minimum temperature of 17.2 degrees today May 23rd. Its lowest level of the decade in May. The record is 15.2 degrees on May 2, 1982. #DelhiRains @SkymetWeather @JATINSKYMET

But will this be a temporary relief for Delhiites?

“Heatwave won’t return any time soon in North India including NCR Delhi,” Mahesh Palawat, head of SkyMet, said in a tweet on Monday. He added that there was soon hail hazard in many parts of Delhi NCR.

IMD forecast for the next 5 days:

The meteorological service had said the pre-monsoon rains could become mildly heavy in Delhi and the NCR, and continue until May 24.
He said “peak intensity” will likely be seen on May 23. “Dust storm activity in isolated locations most likely over Rajasthan May 22-24,” he added.

An alert was issued in North, Central and South Delhi for May 23, while on May 24, a warning was issued in Ghaziabad, Gurgaon, Faridabad and Noida areas.

IMD forecast for Monday, May 23 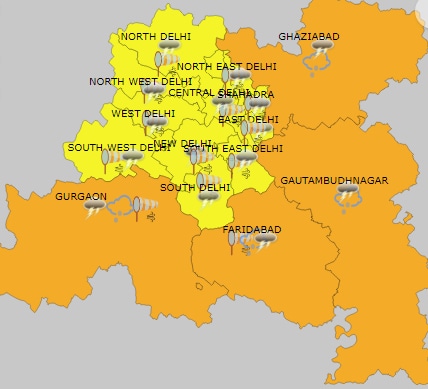 IMD forecast for Tuesday, May 24

The IMD said there will be a “fall in maximum temperatures of 3-5°C in many parts of North West India over the next 3 days and a rise of 2-4°C over the following.

Meanwhile, central India could experience a decrease in maximum temperatures of 3-4°C over the next 3 days and an increase of 2-3°C thereafter.

There will be “no significant change in the maximum temperatures over the state of Gujarat over the next 3 days and will increase by 2-3°C thereafter”.

“No significant change in maximum temperatures most likely over other parts of the country over the next 5 days,” the IMD said.

Respite from the heat wave

Last week, the IMD said the heat wave will continue until May 15, then ease thereafter.

Mrutyunjay Mohapatra, Director General of Meteorology, IMD, said: “The heat wave will continue today and tomorrow. It will gradually decrease from May 16. On the night of May 15, there will be a western disturbance in northwest India.

“Thereafter, the temperatures will decrease and the heat wave will subside,” Mohapatra had said.

The heat wave will continue for today and tomorrow. It will gradually decrease from May 16. On the night of May 15, there will be a western disturbance in northwest India: Mrutyunjay Mohapatra, Director General of Meteorology, IMD

Meanwhile, traffic jams and waterlogging were seen in parts of Delhi on Monday after heavy downpours. In a series of tweets, the weather service advised people to follow traffic advisories and not unplug electronic devices.