Inflation is a growing threat.

Just this morning, the term ‘annus horribilis’ (Latin for ‘a horrible year’) was dropped in a Yahoo! morning brief regarding 2022.

According to the article:

… inflationary pressures are burning American consumers at a rate not seen in decades, spoiling the political fortunes of a US president barely a year into his term. It also conspires to make the difficult task even more difficult for the Federal Reserve chairman he is recommending for a second term.

Data on Wednesday showed that headline consumer inflation in December came in at a torrid pace of 7% year-on-year, with core prices registering a 5.5% gain – the highest since 1991 and the largest 12-month increase since 1982.

Because of these inflation data horrible, let’s review a smart money column we published in October 2021 – the points there are even more applicable now, as we prepare for a potentially tumultuous 2022, inflation-wise.

Technology alone cannot prevent the Treasury from printing one too many inflationary dollars. Nor can the technology overcome physical supply chain bottlenecks to transport a cargo ship full of semiconductors from Taiwan to an electric vehicle (EV) factory in Kentucky.

Current monetary trends, coupled with supply chain constraints, exert a powerful inflationary force that technology may not be able to offset…at least not immediately.

Moreover, financial markets are cyclical, no matter how much we would like them to be otherwise. Stock market valuations go from very high valuations (as they are today) to lower valuations…and then back up again.

Interest rates do the same thing.

Once upon a time, interest rates were very, very high. Today they are very, very weak. A return to something in between seems like a reasonable bet, especially since so many inflation gauges are flashing red.

As we old people remember well – and younger people may have read it in a moldy textbook – soaring inflation rates often lead to soaring interest rates.

During the inflationary episode of the Vietnam War years, for example, the yield on 10-year Treasury bills doubled from 4% to 8%. Although this rate must have seemed quite high at the time, it would double again during the hyper-inflationary 1970s when it skyrocketed to almost 16%.

But everything has been downhill ever since. The generally tepid inflation readings of the past four decades have supported a gradual decline in interest rates to near zero. This delicious episode of several decades encouraged a whole generation of investors to subsequently develop a near-zero fear of inflation.

In other words, four decades of low inflation rates have persuaded bond investors that a 1.52% yield on a 10-year Treasury note is a reasonable return. 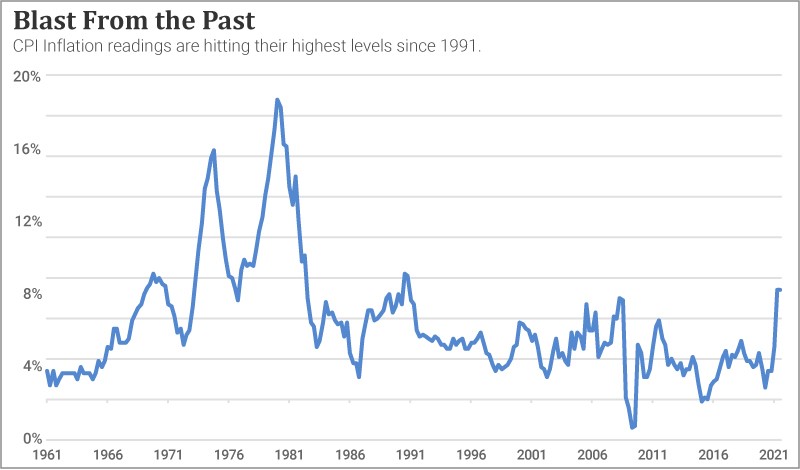 Now, inflation can be especially fatal for fixed income investments like long-term bonds. As I pointed out in a October Clever silver column, the price of today’s 30-year Treasury bonds could suffer a steep discount if inflation continues to rise.

There were 56 new American billionaires in 2020. Here’s how…

Inflation can also pull the rug out from under the stock market. Because of these risks, investors in earlier eras bought precious metals to hedge against inflation.

In the modern era, gold may or may not provide its usual protection. Dorsey, who fears inflation, for example, does not look to gold for protection. Instead, he advocates an allocation to Bitcoin.

But rather than buying gold or crypto, some investors might prefer a more direct inflation hedge… like selling short-term bonds.

Selling short means betting against a stock or other financial asset. Unlike typical trades that benefit from a rising price, a short sale benefits from a fall the price.

Therefore, an investor who shorted the 30-year Treasury bond at today’s prices would make money if a rising rate of inflation caused bond prices to fall.

For most investors, the short selling process seems difficult and confusing. Conveniently, however, several “short-focused” ETFs do the heavy lifting themselves and provide ordinary people with an easy way to “short-sell” different sectors of the bond market.

The Secret to the Widening Wealth Gap Under President Biden

One such ETF is the ProShares Short 20+ Year Treasury ETF (NYSEARC:To be determined). He bets against long-term Treasury bonds. The guts of his portfolio are interest rate swaps that rise in price as long-term interest rates rise. As such, this ETF offers a direct and “clean” hedge against inflation.

This ETF has been a big loser for most of its 12-year existence. But that’s because interest rates fell during that time.

If interest rates started to rise significantly instead of falling, this ETF would finally reward its shareholders.

PS Have you ever wondered how the wealthy elite keep getting richer while many Main Street Americans can only muster less than $10,000 in savings? The answer is not more stimulus checks…or socialism. What you need is an understanding of How? ‘Or’ What to invest your money — and I recorded a video of America’s richest zip code, sharing all the details and giving away the name and ticker symbol of a favorite stock for free. Click here to find out more

At the date of publication, Eric Fry held (neither directly nor indirectly) any position in the securities mentioned in this article.

Eric Fry is a award-winning stock picker with many “10-bagger” calls – in good AND bad markets. How? ‘Or’ What? By finding powerful global megatrends…before they take off. In fact, Eric has recommended 41 different scholarship winners over 1000% over his career. Additionally, he beat 650 of the world’s most famous investors (including Bill Ackman and David Einhorn) in a competition. And today he reveals his next potential 1000% winner. for free, here.

Fuel prices: Brussels in favor of “cheques” for the most disadvantaged – Economy | Top stories