The stock market suffered a lot in December. But just when it looked like Christmas was canceled on Wall Street this year yesterday, stocks rallied significantly.

Is this the start of a long-awaited Santa Claus rally on Wall Street? Our recent research actually suggests that this could be the start of something much bigger…

If you look at the mainstream media, you would think stocks are crashing right now. But this is not the case. the S&P500 is trading around 3,800. It was around 3,600 in June and September.

In other words, while the stock market has swung both violently up and down over the past six months, it ultimately went nowhere. We are exactly where we were six months ago.

It is unusual behavior for a bear market.

Bear market selling does not all happen at the same time. They take “breaks”. But the “breaks” are usually very short. They almost never last more than six months.

When they last this long, however, this is usually a sign that the bear market is about to be over.

The end of the bear market

You may be saying: Well, why is this important?

Because this type of price action is historically consistent with the end of bear markets.

The first time the market’s six-month moving average rose during the 2008 financial crisis was in May 2009. From then on, stocks rose 19% over the following year.

The first time the market’s six-month moving average rose during the early 1990s recession was in February 1991. From then on, stocks jumped 12% during the Next year.

And the first time the market’s six-month moving average rose after Black Monday was in April 1988. From then on, stocks jumped 19% over the next year.

This list of examples goes on and on. Since 1950, the rise in the market’s six-month moving average has consistently signaled the end of bear markets and the start of new bull markets.

Average returns one year after this phenomenon occurred? About 20%!

Exceptions to the rule

There have been only two notable exceptions in the past 70 years when a bear market did not end when the six-month moving average rose. 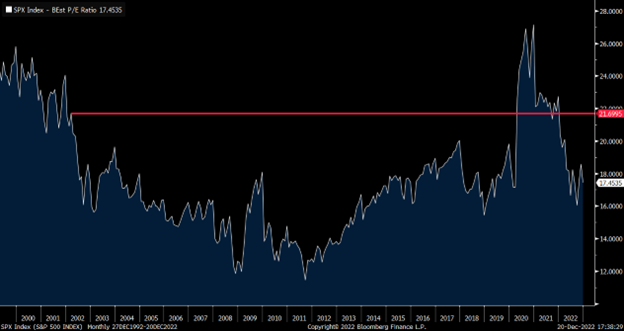 In other words, the stock market did something this month that historically almost always marks the end of bear markets. Its six-month moving average has increased.

Moreover, the only two exceptions to this trend have nothing to do with today. In one, stocks were much more expensive, and in the other, disinflation had not yet taken hold as it is today.

The final word on the end of the bear market

The data here is quite compelling. This strongly suggests that the 2022 bear market is on its last legs and that a new bull market will emerge in 2023.

The emergence of this new bull market will surprise many investors.

But prescient investors who see it coming – and position themselves to take advantage of it today – stand to potentially make small fortunes in 2023 while everyone else races to catch up.

The question is, will you be one of the investors playing catch-up? Or one of those who make small fortunes?

The choice is yours. Learn more while we’re still early in this game.

Not all news on the site expresses the point of view of the site, but we transmit this news automatically and translate it through programmatic technology on the site and not from a human editor.
Mary2022-12-23
4 3 minutes read
Facebook Twitter LinkedIn Tumblr Pinterest Reddit VKontakte Share via Email Print

breaking news Sensex jumps 450 points to over 60,000 ahead of EU budget